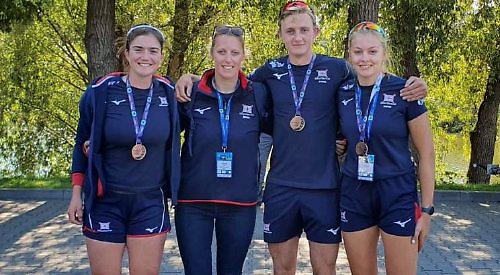 Bruce Turnell, who raced in the men’s coxed four, and Phoebe Snowden and Georgie Robinson-Ranger, in the women’s four, came third in their finals and won a bronze medal.

Daisy Bellamy competed in the women’s pair but did not reach the final of the event while Dan Graham, of Leander Club, came fourth in the men’s pair.

Overall, Great Britain’s rowers picked up two gold medals in the final three events at the regatta, in the men’s double and men’s eight.

The men’s coxed four is coached by Genieve Bailhache, who coached and rowed at Henley RC.

In the early stages of their race, Romania and Italy took the early lead with the latter in front by a canvas by the first timing point. Great Britain held third place.

The Italy crew, which featured three gold medallists from the recent World Rowing U23 Championships, began to look comfortable with 500m to go.

The race finished with the medal positions unchanged, Romania comfortably ahead of Great Britain.

In the women’s four final, Romania established an early lead and went on to dominate the race.

Poland held on for second place as the relatively inexperienced British crew put in a strong performance.

In the men’s pair final Great Britain steered out of their lane slightly, but quickly readjusted.

Romania established half a length lead over Lithuania and at the halfway mark this grew to just over a second with Italy in third place.

There was clear water back to Poland and the crew was having a battle of their own with Great Britain.

By 1,500m, Lithuania increased their rating to try and overhaul Romania and moved into the lead.

Italy didn’t quite have enough to move into second place, and took bronze, while Great Britain overcame Poland to take fourth place.