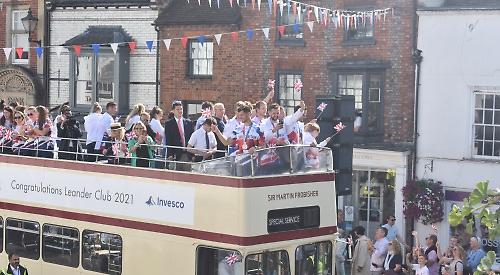 Team GB’s Olympic and Paralympic rowers have thanked Henley, “the home of rowing”, for the support shown at the ‘heroes return’ event on Saturday.

Erin Kennedy, the cox for the Paralympic mixed fours said: “It was amazing being able to celebrate with the town in the home of rowing, and share it with the community. It’s been really surreal because we were out there with no spectators, in isolation, and then we’ve come back and people and are just so thrilled to see us. For us we were just rowing, so it’s amazing that people care so much.”

The crowds were smaller than at previous return events, but hundreds of people still came out to support the rowers. Leander captain Jack Beaumont referenced the more disappointing results, thanking the Henley community “for always backing us, celebrating with us when we win, and also sharing our disappointments when things don’t go our way. It’s been an honour to represent our country and our town and we will keep working our backsides off to give you something to cheer for in the future, and to bring back even more gold medals next time.”

The rowers started the morning by reuniting for breakfast at Leander club, before taking to the water for a row past and some fun mini-races, as small groups of residents watched from Henley bridge and the riverside.

Athletes then got into an open top bus along with Sarah Miller, the mayor of Henley, which took them around Hart Street, Bell Street, New Street, Thameside North and back up Hart Street towards the town hall, with residents cheering from the pavements.

At the town hall, athletes were introduced to the crowd one by one, coming through an archway of oars held by Henley rowing club members.

The mayor then addressed the crowd that had formed outside the town hall. She praised team GB’s six fourth place finishes, and gave a special mention to Vicky Thornley, who she said recorded our best ever finish by a British rower and female sculler.

Particular cheers were raised when the mayor praised the Paralympic performance. She said: “In the Paralympics mixed double and mixed coxed four both took gold, Lawrence and Lauren triumphing in an absolutely nail-biting final 500m, fighting your way back from a boat leg behind. And of course gold for our mixed four Ellen, Giedre, James, Oliver and cox Erin secured GB’s third successive GB Paralympic title in your class, undefeated since 2010.”

She then went on to reference the struggles of lockdown, saying: “James said that success was a rolling momentum, and that phrase has stayed with me. After the buffeting of the Sea Forest Waterway in Tokyo, and the buffeting we all took in the last 18 months from covid, we are all due a celebration and as crews, as a town, and as a country we have that rolling momentum that James was talking about, ready for Paris 2024, ready for what the future will bring to us all. We’ve all come through so much together, our wonderful athletes, the men and women in the arena, every 2k, every set piece, the training on and off the water, the lockdowns, the sacrifices, the loved ones, and the battles we’ve lost along the way, but we’re still here and we’re ready for the future. Olympians, Paralympians, we salute you. Henley salutes you, today, yesterday and tomorrow, we all salute you.”

Captain Jack Beaumont, who himself won a sliver medal in the men’s quads added: “It’s great to be back home from Tokyo and to finally be able to spend time in our community after such a long time of restrictions. The pandemics been turbulent, and in many cases tragic. Last March when the country closed up and life seemed to stop the way we knew it, for us, the show went on. Locked down for months with just a rowing machine for company, our team of extraordinary athletes trained alone. Gyms, lakes and rivers, were replaced by garages, kitchens and living rooms, house upon house of hard graft, all in the pursuit of representing our country at the greatest show on earth.

“All of us started rowing as a hobby, a hobby that’s now got way out of hand. We’re lucky to have several rowing clubs in Henley, so if you’re interested and you’re excited by what you’ve seen, please go and find those clubs and give rowing a try.”

He went on to hail team GB’s overall performance, adding to huge cheers that it was “not bad for our island.”

Graham and Jackie Timbers, who have recently returned to live in Henley after a few decades absence, said it was amazing to see the Olympians come past on the bus: “We’re so happy to be back in Henley, and to be experiencing events like this again. We stayed up all night to watch the rowing, and to now see them in person is just wonderful.”