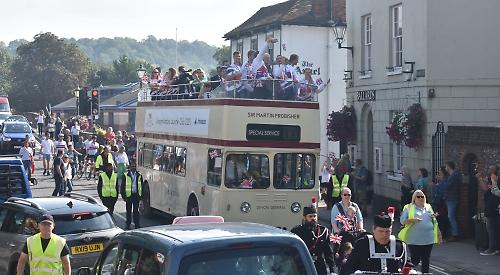 HENLEY’S Olympic and Paralympic athletes were warmly welcomed back to the town on Saturday.

Hundreds of people cheered the Team GB rowers as they were paraded through the town centre on an open-top bus.

Roads were closed to traffic temporarily as the beige double-decker made its way slowly from Leander Club, over Henley Bridge and through the streets to the town hall, where the athletes disembarked for a civic ceremony.

Supporters of all ages walked behind and alongside the vehicle while waving Union flags and taking pictures on their phones.

The 27 rowers, who included several medallists from Japan, waved back and took selfies as they laughed and joked on the top deck.

They included silver medallist Harry Leask, who was part of the guard of honour for the Heroes’ Return event after London 2012.

At the town hall, there were speeches on the steps from Mayor Sarah Miller and Leander captain Jack Beaumont.

The rowers then spent about half an hour chatting with well-wishers, posing for pictures and signing autographs before returning to Leander Club for a private reception.

The rowers described Henley as the “home of rowing” and said they wanted to express their thanks for the unwavering support they had received, especially during the coronavirus pandemic which led to both Games being postponed for a year.

The Olympians did not live up to their own high standards in Tokyo, winning just one silver and one bronze, with six fourth-place finishes.

However, the Paralympians won two golds.

The day of celebration began with a special breakfast at Leander Club where the athletes reminisced about their exploits on the Sea Forest Waterway.

Ollie Cook, who was in the coxless four that finished fourth, said: “It’s really nice to have the kind of reception we get from Henley and to have the team back together as we haven’t been able to see the Paralympians since they got back.”

Hattie Taylor, who was in the women’s four that also finished fourth, said: “It’s nice to see all the other rowers and for everyone to be back together.

“We had a team homecoming at Wembley but it’s nice to do something with just the rowers.

“I think if you live in Henley you’ve got something to do with rowing. When we’re at the Olympics we feel like we’re representing this area, so it’s great to come home to them today.”

Many of the rowers were tired, having spent Friday night at the Henley Festival but after breakfast were happy to take to the water in their Team GB kit for a ceremonial row-past in two eights and a single scull.

The crews carried their boats out of Leander’s boat tent as their names were announced on the loudspeaker and well-wishers were gathered along the towpath.

The athletes rowed upstream to the River & Rowing Museum before turning around at Rod Eyot and heading back downstream as far as Upper Thames Rowing Club and then back to Leander Club.

The exhibition “races” were watched by spectators, who were lined up along the bridge and both banks.

Some people were gathered at Mill Meadows to watch while others stood at the slipway at the bottom of New Street to get a good view. There were also some spectators in boats. After returning to dry land, the athletes got on the bus, which made its way up Hart Street and then along Bell Street, New Street and Thame Side and back up Hart Street to the town hall.

It was led by members of the Shires British Legion Youth Band, who marched in formation and played songs including It’s a Long Way to Tipperary, Quicksilver and the themes from The Great Escape and Chitty Chitty Bang Bang.

Spectators on the pavements took pictures and waved Union flags as the bus went by and people were peering out of windows above shops to get a good view.

The biggest cheers were given to the Paralympians who won gold.

Mrs Timbers said: “We stayed up all night to watch the rowing at the Olympics and to now see them in person is just wonderful.”

Some drivers who were caught up in traffic congestion by the rolling road closures honked their horns in frustration at having to wait for the bus.

Hundreds of people gathered outside the town hall in Market Place as the bus approached and We Are The Champions was played through speakers. Each rower was introduced to the crowd as they came outside through an archway of blades held by members of Henley Rowing Club.

Leask recalled performing that role nine years ago when he was 16.

He said: “In 2012 I was one of the people holding the blades outside the town hall, watching the Olympians walk through, so it’s really special for me that I’m now walking through the archway as one of the Olympians.”

The athletes lined up in front of the town hall and were addressed by Councillor Miller.

She praised all the rowers and gave a special mention to Vicky Thornley, from Bix, who recorded the best ever finish by a British female sculler but couldn’t be there as she was on holiday with her husband, Ric Egington, a former Olympic rower.

Cllr Miller said: “In the Paralympics, the mixed double and mixed coxed four both took gold, Lawrence and Lauren triumphing in an absolutely nail-biting final 500m, fighting your way back from a boat length behind.

“And, of course, gold for our mixed four as Ellen, Giedre, James, Oliver and cox Erin secured GB’s third successive GB Paralympic title in your class — undefeated since 2010.” The Mayor went on to reference the struggles of lockdowns, saying: “James [Fox] said that success was a ‘rolling momentum’ and that phrase has stayed with me.

“After the buffeting of the Sea Forest Waterway in Tokyo, and the buffeting we all took in the last 18 months from covid, we are all due a celebration and as crews, as a town and as a country we have that rolling momentum that James was talking about, ready for Paris 2024, ready for what the future will bring to us all.

“We’ve all come through so much together, our wonderful athletes, the men and women in the arena, every 2km, every set piece, the training on and off the water, the lockdowns, the sacrifices, the loved ones and the battles we’ve lost along the way, but we’re still here and we’re ready for the future.

“Olympians, Paralympians, we salute you. Henley salutes you, today, yesterday and tomorrow. We all salute you.”

Beaumont, who won a silver medal in the men’s quad, apologised to the crowd for the loss of his voice, saying he had enjoyed the Henley Festival on Friday night.

He said: “It’s great to be back home from Tokyo and to finally be able to spend time in our community after such a long time of restrictions. The pandemic has been turbulent and in many cases
tragic. Last March, when the country closed and life the way we knew it seemed to stop, for us, the show went on.

“Locked down for months with just a rowing machine for company, our team of extraordinary athletes trained alone.

“Gyms, lakes and rivers were replaced by garages, kitchens and living rooms; hours upon hours of hard graft, all in the pursuit of representing our country at the greatest show on Earth.

“Thank you for always backing us, celebrating with us when we win and sharing our disappointments when things don’t go our way.

“It has been an honour to represent our country and our town and we will keep working our backsides off to give you something to cheer for in the future and to bring back even more gold medals next time.

“All of us started rowing as a hobby, a hobby that has now got way out of hand. We’re lucky to have several rowing clubs in Henley, so if you’re interested and you’re excited by what you’ve seen, please go and find those clubs and give rowing a try.”

Beaumont thanked the clubs, volunteers and the National Lottery before hailing Team GB’s overall performance, saying to huge cheers that it was “not bad for our little island”.

The rowers handed out chocolate medals to people in the crowd, posed for pictures and signed autographs.

Carolina and James Forester, of Queen Close, Henley, who were there with their children, Ethan, five, Isabel, two, and Jacob, six, said it was special to meet the athletes in person.

Mrs Foster said: “It’s just an amazing day and great to see a bit of history happening in front of you in our town.”

Julian and Nicola George were in the square with their son Henry to support their rowing nephew Tom George.

Mr George said: “I lived in Henley for decades and was involved with rowing through the Seventies and early Eighties.

“We’re a family of rowers and our daughter Katherine won at the regatta.

“It’s good for the Olympic rowers to be shown some appreciation because they haven’t had a lot of it this year.”

Mrs George added: “It’s great to be with Tom and celebrate with them in real life, not just through the telly.” Angus Groom’s father Glyn, 60, said: “It has been a really fantastic day. It’s so good of Leander Club and the town to put this on for the rowers.”

Pedro Newman, 12, of Goodall Close, Henley, interviewed some of the Paralympians for Gold Dust Radio in Reading with the help of his father Daniel.

Ellen Buttrick, 24, who won gold in the mixed four at the Paralympics, said: “I’ve lived in Henley since 2019 and I love seeing the community come together to share our success.

“I really feel part of town now. I volunteer with a brownies group and some of them are out cheering me on today. It’s amazing to get such great support from your own community.”

Erin Kennedy, who coxed the mixed four at the Paralympics, said: “It was amazing being able to celebrate with the town in the home of rowing and share it with the community.

“It has been really surreal because we were out there with no spectators, in isolation, and then we’ve come back and people and are just so thrilled to see us. It’s amazing that people care so much.”