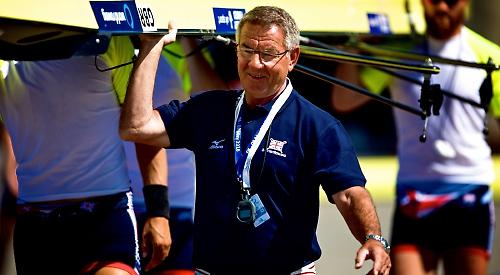 BRITISH Rowing has come in for more criticism after its former head coach signed a deal to lead the French Olympic team.

This summer, Team GB returned from Japan without winning an Olympic rowing gold medal for the first time since 1980.

It was their second lowest medal haul at an Olympics since Atlanta in 1996 and Britain lost its status as the leading rowing nation.

On Monday, Grobler, who led Team GB rowers at seven consecutive Olympics from 1992 to 2016, started work with the French Rowing Federation which hailed him as the “best trainer in the world”.

He wrote on Twitter: “I’ve seen coaches move countries before, but this one really stings.

“Sorry British Rowing, I don’t see how this strategy is going to put our athletes in the best possible position in Paris.”

Gröbler, who is a member of Leander Club, produced 20 Olympic champions who won 33 gold medals and 23 medal-winning crews at the World Championships.

He had intended to stay until the Tokyo Games but had said he was unable to commit to another four years.

British Rowing wanted a new team in charge as quickly as possible because of the truncated Olympic cycle.

It has been suggested that his departure was linked to a desire to change the culture and move to a more sensitive environment.

But when Team GB only took silver in the men’s quadruple sculls and bronze in the men’s eight during the rowing regatta in Tokyo, the fall-out turned toxic.

Josh Bugajski, a member of the men’s eight, hit out at Gröbler, saying he used to “destroy” athletes he didn’t like.

He told an interviewer that he’d “cracked open a bottle of champagne when Jürgen retired”.

Bugajski added: “I had a very dark three years under him. I will admit, he’s a good coach to some people, but there were some people he just seemed to take a disliking to. What he did to them was just destroy them, destroy their soul, destroy everything they had.”

However, his crewmates made it known that they didn’t agree with him. Mohamed Sbihi, part of the same crew, defended Gröbler, saying: “Jürgen knew how to elevate people.”

The Henley Royal Regatta chairman said: “It may be that the approach has gone a bit soft. If we want a soft approach, we will have to expect softer results.”

Garry Herbert, the gold medal-winning cox from the 1992 Olympics, said he blamed the British Rowing hierarchy for the poor showing in Tokyo. “You do not allow Jürgen Gröbler to stand down a year before the Olympic Games,” he said in July. “I’m almost speechless.”

The team’s under-performance in Japan led to a review and chief executive Andy Parkinson resigned last month after six years in charge.

Performance director Brendan Purcell acknowledged in Tokyo that his team did not meet expectations given the £24.6 million in Lottery funding it received over the five-year Olympic cycle.

But Mark Davis, who chairs British Rowing, hit back at criticism of the team’s performance saying the team was in transition after 80 per cent of the squad retired after the Rio Games in 2016.