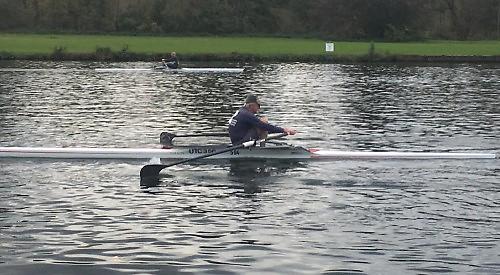 A SCULLER feared he would die when his boat was sliced in half in a collision with a boat that was on the wrong side of the river.

Clive Scott-Hopkins, 84, was pushed underneath the motorboat that hit him and had to fight his way back up to the surface.

The incident occurred on the Henley Reach near Temple Island at lunchtime on Sunday.

Mr Scott-Hopkins, who is a member of Upper Thames Rowing Club, said: “This big black boat suddenly rammed into me and threw me into the water.

“I thought I was drowning. I was underneath the boat thinking, ‘I don’t know how I’m going to get out of this’. I’d hurt my arm so I couldn’t use that to help me.

“I was only saved because a narrowboat, which was also on the wrong side of the river, was following just behind and saw what had happened. They managed to quickly get to the bank and throw a rope out to me and then the four of them hauled me on to the bank.

“It was a traumatic incident and I was very shaken. My right arm was badly scratched but I could have lost the use of it.

“I also banged my head but I think my rowing cap saved me.”

Mr Scott-Hopkins, who lives in Waltham St Lawrence and has sculled on the river in Henley for more than 50 years, said he hadn’t seen the motorboat before it struck him. It was travelling downstream and should have on the Berkshire side of the river but it was on the Buckinghamshire side where he was travelling upstream facing away from the oncoming boat.

Mr Scott-Hopkins said: “I normally row on a weekday because it’s quieter but because it was such a nice day on Sunday I went at lunchtime because there’s usually less traffic then.

“Sculling boats are low down, which may have made me harder to spot, but being on the wrong side was a serious breach of river rules and you don’t expect to meet something head-on that shouldn’t be there.

“The boat that hit me just carried on until they realised what they had done.

“The person driving kept saying, ‘I’m so sorry’ but he didn’t seem to know he’d been on the wrong side of the river.

“I think some inexperienced people think they need to keep to the left like you do on a road but it’s not like that.

“The people that rescued me called an ambulance but we realised that wouldn’t be able to get to the bank because the road’s so far away.

“Somebody from Hobbs of Henley was there and I asked them if they could take me back to Upper Thames.

“The ambulance wasn’t arriving so I went to my car where I had a spare shirt, which I changed into because I was sopping wet.

“I decided to drive seven or eight miles home, which takes about 20 minutes and wasn’t ideal but what is one to do? I was shaking but that was because I was so cold as well as the shock.

“When I got home my wife got the ambulance to come there. They checked me over and decided they needed to take me to Royal Berkshire hospital.

“They took it pretty seriously and I was there for six hours until 9pm.”

Mr Scott-Hopkins had chest
X-rays and his arm was bandaged.

He called for motorboat access to the Henley section of the Thames to be restricted and suggested signs saying “no exit” or “dead slow” are installed.

“I’ve also asked for a bylaw to give priority to all rowing boats over motorboats,” said Mr Scott-Hopkins.

“This is the most famous stretch of rowing water in the country and should have priority use for rowing boats. We’ve got Upper Thames RC, Leander and Henley RC. None of us is safe at present as there’s far too much river traffic.

“With sculling boats we’re facing backwards, we can’t see behind and we don’t have coxes, so we have to rely on the river behind us being empty. You don’t look behind you constantly to check what’s there and we haven’t got eyes in the back of our heads.

“Motorboats that are coming into that area should already know that they should be slowing down.

“If they don’t learn we will have to stop sculling. Now all scullers have to be aware that this could happen.”

Mr Scott-Hopkins, who took up rowing when he was at Eton College, goes out on the river two or three times a week, depending on the time of year.

When he was 70 he won in his age category at the Henley Sculls and 10 years later was the oldest person to compete in the event. He has ordered a replacement for his WinTech boat, which has cost him £4,000. He will receive about £2,000 from his insurance company for his old boat as it was 12 years old.

Mr Scott-Hopkins said he would be “a bit nervous” getting back on the water.

“I’ll keep turning to look behind me,” he said. “I’m going to try to attach a rear view mirror on to the next boat.”

Justin Sutherland, chairman of Upper Thames RC, said: “This was a nightmarish incident and everyone at the club sends Clive our best wishes for a speedy recovery.”