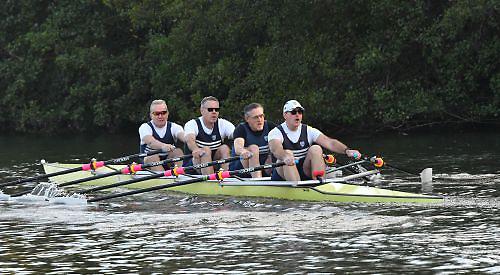 Henley had 42 crews competing over the 3,700m downstream course from the Roebuck to Caversham Bridge in an event that attracted almost 400 crews across three divisions.

The Henley wins came across all age groups with Victoria Molloy and Ann Tully winning Masters F2x and at the other end of the spectrum the WJ14 quad of Amelia McDavid, Martha Dickson, Chloe Hughes, Jemima Butterworth and cox Jemima Painter winning their first race.

There were also emphatic wins with the WJ16 4+ of Sophie Eltze, Sophia Spanswick, Daisy Janes, Emma Eltze and cox Caitlin Emery winning their category by one minute, 46 seconds and Nonnie Luke winning WJ17 1x by one minute, 26 seconds. Some of the junior crews also took on the seniors with Nonnie Luke, Pippa Jamieson, Ailish Harkin and Lucy Jones winning the women’s intermediate quads and Jasmine Stockdale and Blair Fitzgerald the women’s intermediate pairs.

Henley had a clean sweep of the junior girls’ doubles events with Pippa Jamieson and Laoise O’Donohue in the WJ18, Abbie Artherton and Eyla Wild in WJ17, Gwennie Hunter and Emma Eltze in WJ16 and Lilya Wild and Jess Mack in WJ15. Wild and Mack also had a win in WJ15 quads with Freya Smith, Nicolette Pagdin and cox Neave Stark.

The Upper Thames masters E quad scull crew of stroke Andy Ciecierski, Chris Howell, Pete Beaumont and Steve Dance won their division for average age 55 to 59 years. The crew, racing for the first time this season, triumphed in a time of 13 minutes, the fastest time of any masters crew at the event.

In the masters H event for average age of 70 to 74 years, the Upper Thames coxed four of Tim Lincoln, Graham Gate, Tim Kitto, Mike Dudley and cox Tony Pigot recorded a time of 15 minutes, 16 seconds but had no opposition in their division.