Henley athletes bag most wins at own sculling event 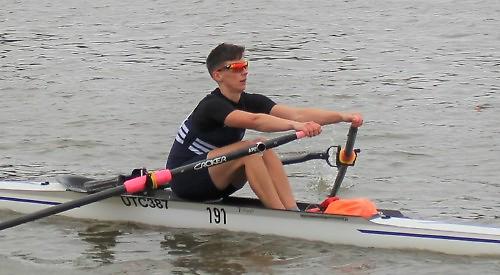 More than 450 crews — split over two divisions — competed over the 3,000m course from the Henley Business School to the Royal Regatta finish.

The host club had the largest entry with 71 crews competing, 42 of which were single scullers. Henley were also the most successful club with eight wins — seven coming from the junior girls.

Henley won all three of the junior girls’ singles events.

Gwennie Hunter dominated the WJ16 event to win by 50 seconds with another seven Henley scullers filling places four to 10 in the heavily contested event.

In their first ever single scull race Lilya Wild sculled well in the difficult conditions to take first place in the WJ15 event followed by Jessica Mack in second and Florence Short fourth.

In the quad sculls the WJ14s took first and second place in their event. The quad of Mima Butterworth, Molly Hall, Chloe Hughes, Charlotte Tong and cox Florence French won in a time of 13 minutes and 59 seconds, which was 54 seconds ahead of teammates Lucy Green, Lilian Graham, Martha Dickson, Evelyn Meeks and cox Amelie McDavid.

The Henley men’s crew of George Eden, Richard Hume, Oliver Stephens and Rupert Singfield won the top event — the open quads — with a time of 11 minutes and nine seconds which was also the fastest time of the day.

Upper Thames had 12 entries with their standout performance coming from Naomi Holland.

The double scull of Sian Hinton and Courtney Edmonds finished second in the women’s open event to a strong crew from Sudbury RC.

Despite local knowledge the Upper Thames crew steered too much in the middle of the river where the stream is stronger and the Sudbury crew who had started directly in front of them were able to stay closer to the bank and pull away to win by 16 seconds.

In the men’s event Matt Swiss finished fourth, just 17 seconds behind the winner from Cambridge ’99 and two seconds off second place.

In Division 2 Swiss then jumped into a double scull with Luke Moneley in a new combination finishing third behind Itchen Imperial.

Miriam Luke, Sally Markham, Jo Wilby and Claire Forgie triumphed in the masters E/F handicap quadruple sculls. Wilby and Forgie, impressed having recently returned to rowing after a gap of a couple of years.

The men’s master E quad, stroked by Dave Luke, won their event in a time of exactly 13 minutes. The women’s masters D double scull of Sally Markham and Moira Mcallum finished second in their first race together, losing by nine seconds after 14 minutes of racing.

Other entries from Upper Thames included Bill Pollard and Stewart Bell in the masters double sculls who were and Will Hoodless who finished seventh in the men’s open single sculls.