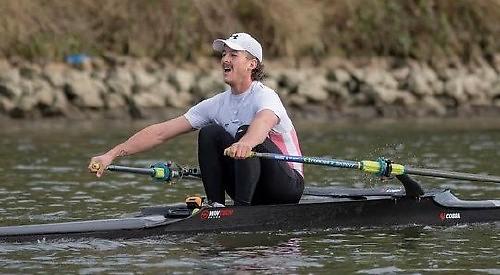 LEANDER CLUB had a first and second place finish in the men’s single sculls at the GB long distance trials last weekend.

The trials, held in Boston, Lincolnshire, saw 42 athletes compete over two days with a 2km ergo test on the Saturday and a 5km time trial on the water in pairs and singles on the Sunday.

The ergo tests went well for the Leander athletes achieving 28 personal bests across the men’s and women’s squad.

The high winds predicted for the Sunday were not as bad as predicted, making the race faster with a strong tail-wind. Up first to race in the morning division were the women, where Leander had athletes racing in seven pairs and six singles.

In the pairs Sam Redgrave and Esme Booth took the win over teammates Lauren Irwin and Alice Davies. Impressively, Leander had athletes in each of the top seven positions.

After the races, Leander’s women’s chief coach, Ross Hunter, said: “It’s really great to have GB trials back on again and as always a big thanks to Boston RC and all the volunteers who help make the day run so smoothly.”

The afternoon was the turn of the men with Leander boating five pairs and nine singles.

In the singles Leander’s Jack Burns took the win closely followed by club based Seb Devereux in second place.

Men’s chief coach Matt Beechey said: “It was a positive start to the season and something we can build on.”