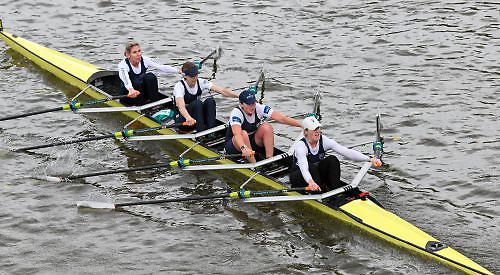 LEANDER Club crews dominated this year’s fours head of the river race in London last Saturday, taking the honours in both the men’s and women’s quads and coxless fours events as well as the women’s coxed fours.

There was also success for Henley Rowing Club as their junior girls won all three of their events, setting a new course record in the process. The following day saw Upper Thames lead the way in the masters events.

The race was over the four-and-a-quarter mile championship Boat Race course but running from Chiswick to Putney and attracted 410 entries. The field on Saturday was led by Leander’s top men’s quad who were the first to cross the line, not only winning their event pennant but also taking the fastest time of the day.

This was only the start of what turned out to be a successful fours head of the river campaign.

Steering from the stroke seat and fresh off her first win at the previous weekends GB trials, Anderson led her crew to a six-second victory and fastest women’s time of the day over a composite crew. Leander’s second women’s quad were third.

Leander’s junior quad finished second place in their event, which placed them 17th fastest crew of the day.

In junior girls’ quads Natalie Schoenmakers, Nonnie Luke, Ailish Harkin and Laoise Odonohue won by 11 seconds ahead of Marlow and 13 seconds ahead of third-placed Shiplake College. Their time of 20 minutes, 28.5 seconds made them the third fastest of all women’s quads competing. This was also the sixth time out of the last seven occasions that this race has been won by Henley.

The first women’s quad of Courtney Edmonds, Lucy Ryan, Sian Hinton and Meghann Jackson finished fourth in the championship quad event with all the three crews finishing before them containing professional athletes.

In the club quads the other two Upper Thames crews finished fifth and 13th in an event with 28 entries. The second quad of Daisy Hampton, Penny Hamand, Rebecca Abbott and Yasmin Ryman-King finished just 23 seconds behind the winning crew from Molesey. The crew of Tijssen Teuntje, Beth Arscott, Isobel Pullinger and Ella Wandless were a further 30 seconds behind.

In the men’s events the first four of Steve Griffiths, Matt Swiss, Gareth Syphas and stroked by James Stanhope finished 13th in a strong field with many of the crews containing international athletes. The time of the Upper Thames crew would have put them third in the club event.

The second Upper Thames crew of Sam Diserens, Sean Moneley, Michael Scott and Matthew Cummings were 24 seconds behind and finished 11th in a field of 32 crews.

On Sunday it was the turn of the veteran crews with Upper Thames finishing as the most successful club.

In a repeat of the 2019 event the crew from Bristol started just one place behind. Over the first half of the race the Bristol crew closed the gap but from Hammersmith Bridge the Upper Thames crew were able to push away and secure victory.