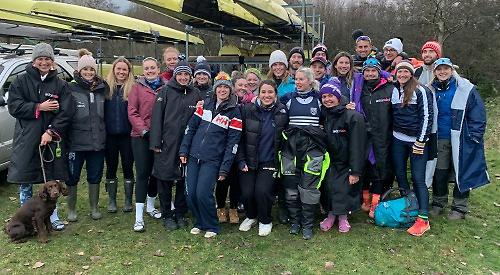 The event for fours and eights took place in bright sunshine but this couldn’t offset the cold wind and freezing temperatures that the athletes had to contend with.

In all 298 crews were split across two divisions in what was a capacity entry for the event which was raced over a challenging 4,000-metre up stream course that consisted of various bends and finished just below the Wallingford town bridge.

From nine entries, Henley Rowing Club junior girls finished with four outright wins and a second and third place with three crews having no opposition in their category.

The time of 16 minutes and 58 seconds for the winning boat also made them second fastest junior girls’ eight across all age groups. They were only beaten by the Henley WJ18 eight octuple of Eyla Wild, Lucy Jones, Pippa Jamieson, Ailish Harkin, Nonnie Luke, Laoise O’Donohue, Natalie Schoenmakers, Josie Sawbridge and cox Rose McEwan who finished in 16 minutes and 21 seconds — 39 seconds ahead of St Edward’s School. Their finishing time put them in 10th place of all the women’s eights competing which included top boats from Oxford University, Oxford Brookes and Leander.

Taking second place in the WJ16 event was the other half of the winning WJ16 eight of Ella Dickson, Anna Merritt, Gwennie Hunter, Emma Eltze and cox Matilda Ley, who finished 83 seconds ahead of third place Lady Eleanor Holles School.

Only one other women’s coxed four was quicker than the three Henley boats and that was the Oxford Brookes top boat.

In Division 2 both the Leander women’s eights racing in Band 1 were split by less than two seconds. Oxford Women won this category overall. The Leander women’s third eight won Band 2 eights convincingly ahead of the next placed crew.

The women’s second eight also had a very strong race finishing 10th. In the afternoon
division there were two Masters D eights from Upper Thames racing each other and crews from Marlow and Wallingford. The Upper Thames crews finished first and second.