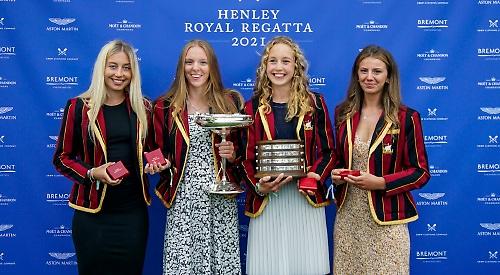 SHIPLAKE COLLEGE’S Henley Royal Regatta winning girl’s rowing quad has been shortlisted in the this year’s British Rowing Awards under the category Junior/School Crew of the Year.

The awards attracted a huge number of nominations from across the country and is testament to the hard work the girls have put in over a difficult couple of years for competitive rowing. Shiplake’s director of rowing, Dave Currie, said: “I’m delighted that the girls and their coach, Dan Safdari have been shortlisted.

“To perform how they did during 18 months of lockdowns and setbacks shows what can be achieved with sheer will, determination and dedication to their sport and training.

“They were a very special crew and their achievements in 2021 most definitely need to be celebrated. I am incredibly proud of them all and am excited for the future of rowing at Shiplake.”