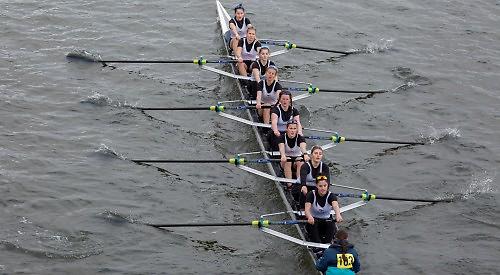 HENLEY Rowing Club’s junior girls squad put in an impressive performance at Quintin Head on Saturday winning all three of the junior girls’ events to secure the Victor Ludorum.

The eights only event was run over a 4.6km course from Chiswick Bridge (boat race finish) to Harrods Depository which is just below Hammersmith Bridge and is limited to 250 crews. The girls J18 eight of Natalie Schoenmakers, Lucy Jones, Scarlett Dewar, Pippa Jamieson, Nonnie Luke, Laoise O’Donohue, Ailish Harkin, Josie Sawbridge and cox Caitlin Emery won their category by 23 seconds over Surbiton High School and Headington School a further second behind.

This was a good result for a junior crew putting them seventh of all the women’s crews only behind the likes of the two Oxford University women’s boat race trial eights and the top two Oxford Brookes boats.

For the J15 girls’ eight of Freya Smith, Florence Short, Josie Savin, Annie Hunt, Nicolette Pagdin, Lilya Wild, Holly Fuller, Jess Mack and cox Nicole Bielinski this was their first race in a sweep oared event and their first experience of the Tideway.

Despite some initial difficulties in the marshalling area, Henley put in a good performance and raced well. Their time of 14 minutes, 19 seconds put them in second place five seconds behind Surbiton School and 13 seconds ahead of Lady Eleanor Holles School before a 10 seconds penalty awarded to Surbiton gave Henley the win.