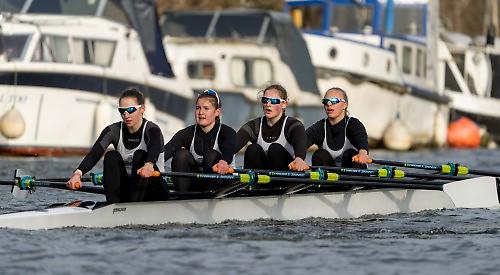 HENLEY Rowing Club picked up eight wins, six second-placed finishes and a third-place spot at last Saturday’s Hampton Head, one of the largest junior head races which attracted 470 crews in two divisions over the 3,000 metre course.

In smaller boats wins were picked up by Josie Sawbridge and Ailish Harkin in the junior girls’ pairs and in double sculls at J16 by Gwennie Hunter and Matilda Macartney and at J15 by Lilya Wild and Jess Mack.

In a competitive boys’ entry the standout performances from the Henley squad came in the school/junior quad and double.

In the school/qunior quads, illness caused a substitution and the crew of Guy Hutchins, David Wallace, Finlay Ribbons and Ross Lamont finished third in a field of 19 crews behind two boats from Windsor Boys’ School.

In the school/junior doubles the crew of Guy Hutchins and David Wallace never quite hit their rhythm had a clash down the course. but finished second out of 29 crews.