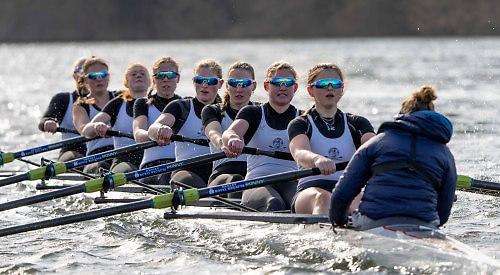 HENLEY Rowing Club came away with eight wins from their own fours and eights head of the river race held last Saturday whilst Upper Thames and Shiplake College also clocked up wins.

Conditions were not the best with a strong head wind blowing down the 3km course which started at the bottom end of Greenlands and ended at the Henley Royal Regatta finish. The conditions made marshalling difficult with crews being blown onto one another with one Henley boat being damaged to such a degree that it and its crew had to return on a safety boat.

More than 200 crews took part across the two divisions and of these 80 crews were eights.

As well as their wins, Henley crews put in various promising performances, no more so than in the WJ15 quads which was won by Surbiton but Henley took second, third and fourth places with the second and third placed crews being the younger WJ14 squad.

Racing at their own age in the afternoon against 17 other crews and in worsening conditions the WJ14 crew of Jemima Painter, Lilian Graham, Molly Hall, Martha Dickson, and cox Florence French triumphed with the other Henley crew of Mima Butterworth, Lucy Green, Amelie McDavid, Charlotte Tong and cox Tilly Mackenzie-Smith finishing second.

The WJ15 squad of Holly Fuller, Nicollete Pagdin, Lilya Wild and Jess Mack with cox Nicole Bielinski beat Surbiton High School in the coxed fours event with a time that put them in fourth place of all the women’s coxed fours racing. In the afternoon division the girls were joined by Florence Short, Annie Hunt, Josie Savin and Freya Smith to compete in WJ15 8s but on this occasion Surbiton took hours with Henley second.

The only junior girls eight beating them were the Henley girls eight of Josie Sawbridge, Ailish Harkin, Laoise O'Donohue, Nonnie Luke, Pippa Jamieson, Scarlett Dewar, Lucy Jones, Nat Schoenmakers and cox Rose McEwan who won the WJ18 event by 41 seconds. This time made them the fourth fastest women’s eight of the day behind two Oxford Brookes and a Leander eight.