Veteran rowers who keep going as it’s so much fun 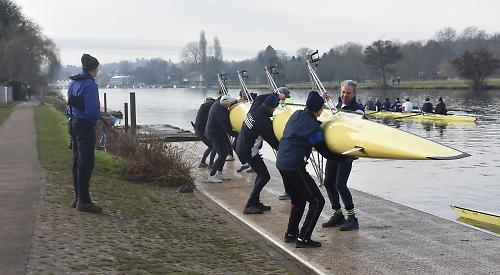 ROWING is about camaraderie and being on the same wavelength.

So say a group of Henley rowers who have been enjoying the sport for more than 60 years.

The Silver Tops, a group of 36 rowers at Upper Thames Rowing Club, practise on the Henley reach every Friday morning.

There are two rules for joining the group — you must have rowed at a high level and you must be over 60 years old.

But while the Silver Tops take their rowing very seriously, they say that friendships and conversations between members are more
important.

Alun Jones, 85, one of the founders of the group, said: “One of my friends who used to row here asked me to join and I was fairly fit as I used to run every day.

“By the Nineties we got our first eight and it was such an achievement that we had a celebratory lunch at Leander.

“More people wanted to join as they seemed to think we were a sociable bunch and that is how the group started.

“We have all rowed at other rowing clubs or school or college, so every new person joining has to have the ability to row quite well as we can’t take novices.

“We have worked out a certain style so we can move on different boats. Every week we row with a different combination of people in every boat — we mix and match and I think that is the secret of our success.

“Some of our members still compete and some of us are more competitive than others I suppose but that is not why we do it.

“We do it for the exercise but the chats over coffee and biscuits in the clubhouse after the rowing are just as much part of the fun.

“We take our rowing quite seriously and we want to have a good outing but ultimately coming back to the boathouse and our chats in a friendly atmosphere are very important.

“Most of us started rowing at school and all of us have rowed for at least 50 years. We have a few people that started later in life but that is not as easy.

“I started when I was 15 and it really is like riding a bike, you never forget how to do it.

“Most of us can row on both sides and that is also why we can always mix up the crews.

“It’s a privilege for us to be able to row on this beautiful stretch of the river, which really is nirvana.”

Paul Mainds, 72, who lives in Medmenham, said: “I’m doing more rowing now than I probably did at university — a lot of us also have rowing machines at home and during lockdown we were training like that.

“We are very lucky to be able to practice in the epicentre of the world of rowing here in Henley.

“I always say that every week we row on the Olympic course because this is the course that was used in the Olympics in 1948.”

Mr Mainds was chief executive of the River & Rowing Museum for 15 years, taking on the role in early 1999 only a few months after the Queen opened the venue.

He grew up in Amersham and took up rowing at the age of 15.

He studied theology at Leeds and trained as a teacher in Durham and rowed for both universities.

In 1973, he was part of a Durham eight that won a string of regattas and competed in the Ladies’ Challenge Plate at Henley.

He joined Upper Thames RC in 1975 and has been rowing there ever since. His brother Sam also rows with the Silver Tops.

Mr Mainds said: “People say that you never step in the same river twice and I think it’s very true, the river is always different.

“The joy of rowing in an eight is the reason why I continue with the Silver Tops every Friday.

“Having a group like this is great and everyone has a very good background in the sport and that is a great motivator.

“I’ve rowed since school and it has been a certainty through life for me. A lot of rowers start to row because they are not good at ball games or can’t run and I think that was a factor for me too.”

He said that one of the highlights of his time with the team was when Alan Campbell, GB’s first Olympic medallist in the men’s single scull since 1928, accepted an invitation to join the group for a session. Mr Mainds said: “We were short of one that morning and Tony Peperell bumped into Alan Campbell and asked him to join us and he said, ‘yes’.

“He was fantastic — we had a great time and he also joined us in the clubhouse for a chat.”

Mr Peperell, 77, started rowing at school in London when he was 16 and joined the Silver Tops 15 years ago after Mr Jones invited him to the club.

He also rowed at Twickenham Rowing Club and at Loughborough University.

“The community that we have built has been absolutely amazing and it’s a great privilege to be together.

“We found that many of us have a lot in common.

“We work quite hard to keep the standard up but we don’t have the capacity to teach people how to row.

“It would be unbalanced and would upset other members if someone was not at the same level.

“We also have formal lunches and make a real fuss of it. Our wives have been on the sidelines at every regatta and seen us getting soaking wet.

“It’s a privilege to row on such a beautiful stretch of the river in top class boats and on Friday mornings it feels like we have the club to ourselves.

“I think it is quite difficult for men to get together at our age and when you come up with a situation that works, people join and stay and the group gets stronger.”

He was in the GB lightweight squad in the mid-Seventies. “I haven’t stopped
rowing since 1972,” he said. “Being in the Silver Tops is good fun as we all love the river and the feeling of camaraderie is really strong.

“Most of our problems are put right over a coffee in the clubhouse — that is the most important part of the outing.

“Upper Thames allows us to have some very high standard equipment, which is quite unusual for a group like ours; usually older people get older boats.

“There’s 20 to 22 of us rowing together every week and there are some people who have done top class rowing before coming here.

“We are now almost at maximum capacity and not able to take more people on.

“I think we are popular because we are a nice bunch, members get a very good standard of rowing and we are all of a similar age.”

Peter Taylor, 85, said: “I think the public don’t appreciate that rowing is a team sport more than any other — everyone in the boat has to do the same thing at the same time, it’s the team sport for excellence.”

The Silver Tops regularly compete at the Phyllis Court Time Trials, where they have held the cup for the coxless four for the past nine years.

They will also be taking part in the Vogalonga regatta in Venice.

Participants gather in St Mark’s Basin in front of the ducal palace, sing hymns to San Marco and begin the non-competitive race, a 30km scenic route along the canals and historical buildings.