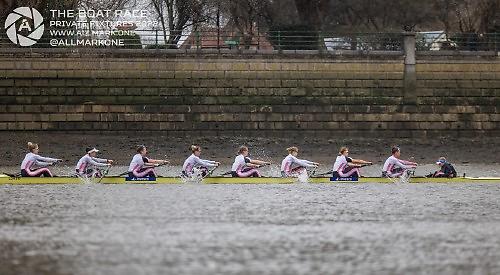 FOLLOWING on from a solid set of results at the Great Britain trials in Boston it was a quick turnaround for the Leander women’s squad to get back into the eights in preparation for a first in a series of boat race fixtures against Oxford University on the Championship Course in London.

With the leading Leander athletes currently on training camp with the Great Britain team the fixtures provided a good opportunity for the two club crews to take on Oxford.

For safety reasons, the arrival of storm Franklin meant that racing was not allowed to carry on past Hammersmith Bridge. This meant both races were held between the Boat Race start and the bridge.

In the first race Leander A, led by Meg Slabbert, showcased the raw power within their crew by taking almost a length lead in the first two minutes.

Oxford held on to the stern of Leander and as the race progressed Oxford had the advantage of the inside of the Surrey bend they drew back level and moved out to a three-quarters-of-a-length lead at the finish.

For the second race, stations were switched as Leander got off to a better start and opened up a quarter-of-a-length lead on Oxford. Oxford pushed and both crews stayed level for most of the race. In the sprint for the line Oxford were able to open up a marginal lead and won by a quarter-of-a-length.

The Leander B crew was formed with largely development athletes as Osiris opted for three five-minute races between Putney and Hammersmith Bridge.

In the first two races Osiris could not match the power of the Leander crew, stroked by Abigail Topp. Leander opened up a large lead in both races to win by three and two lengths respectively.

In the third race Oxford were able to keep up with the Leander women over the five-minute race. However, the Leander crew still opened up a lead to win by a canvas.

“All the athletes involved absolutely loved being part of such an exciting day of racing. For Leander it’s a great opportunity to test ourselves on the build-up to women’s eights head of the river race. Our focus is now on the fixture against Cambridge in two weeks’ time and the women’s head of the river on March 12.”