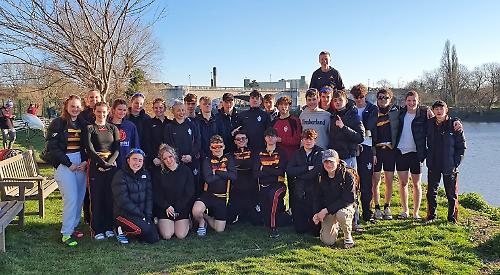 WITH several major events coming up on the Tideway — the Women’s Head of the River and the Schools’ Head — Henley Rowing Clubs older junior girls and several crews from Shiplake College competed in the Hammersmith Head.

The race took place from Chiswick Bridge to Hammersmith Bridge in the first 4,000m of the course of the major events. Conditions for last Sunday’s event were good as the Tideway can be notorious but the water was good despite a slight headwind against the stream.

Three Henley girls’ eights competed against the nearly 300 entries of which approximately 80 were women’s eights.

Shiplake College’s girls’ quad won the junior sculls event by five seconds. The college also entered a girls’ eight for the first time in this event and they placed seventh out of 14 crews in the junior event.

There were three Shiplake boys’ eights entered. The second eight finished second in the junior eights but were the fastest school in the second eight event and the third eight was the second fastest, just behind Radley College.

The first eight took part in the open eights championship and came fourth overall, behind three university crews but ahead of many local rowing schools.