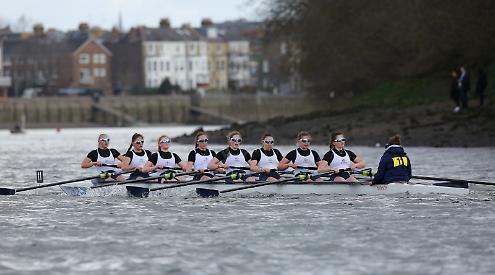 THERE was success for both Leander Club and Henley Rowing Club at last Saturday’s women’s eights head of the river race.

Leander Club’s A crew secured the head pennant with the fastest time of the day — 19 minutes, 15 seconds — while Henley Rowing Club’s A crew won the school/junior pennant.

This was the first time the race had taken place since 2018 as more than 300 crews competed in reverse of the Boat Race course from Chiswick to Putney.

As often happens on the 6.8km course, conditions were fine down to Hammersmith but after coming round the bend after Hammersmith Bridge the crews had to deal with some tough conditions due to the wind.

For the first time in its history, Leander fielded four crews in the event.

The Leander A boat, coxed by Morgan Baynham-Williams and made up of Heidi Long, Lauren Irwin, Sophia Heath, Rowan McKellar, Esme Booth, Sam Redgrave, Alice Davies and Emily Ford were the first crew to start and put on an impressive display.

At each of the interval markers they had a significant winning margin and crossed the line with a win of 35 seconds ahead of the second placed crew.

The remaining Leander crews saw one more finish in the top five whilst all the others finished inside the top 14.

This race finished off an intense block of eights racing for the Leander athletes and now the focus shifts to senior and U23 British international selection where 26 Leander women will be aiming to impress new women’s chief coach, Andrew Randell, at trials next month.

Henley’s second boat finished third in the junior girls’ category with there being no specific event for this younger U16 boat. The two Henley crews were only being split by Headington School who took second place.

The third junior boat finished seventh in their category out of the 24 crews competing while he fourth Henley crew was the masters women who finished in the middle of the pack of the competing crews.