Henley Girls put on impressive display at the Tideway 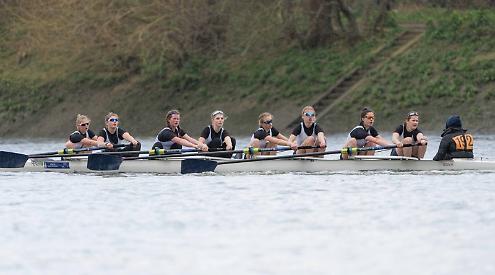 HENLEY Junior Girls returned to the Tideway on Monday to compete in the Schools Head with more than 300 other school and junior club crews from across the UK including Northern Ireland and Scotland.

Finishing in a new record time of 19.01, the girls were 37 seconds ahead of their closest rivals and third fastest girls’ eight of the day.

Wednesday saw the Henley juniors competing at the Oarsport Junior Sculling Head, for their third event in five days. With more than 500 crews competing this is a major event for the junior boys and girls who all competed in quad sculls. The event is held at Eton Dorney Rowing Lake, the crews racing two 1,800m legs of the lake with the aggregate time for both determining the winner. Despite a very wet day, the lake presented near perfect conditions for racing.

The B boat: Emma Eltze, Blair Fitzgerald, Evie Tingate and Josie Sawbridge also missed out on gold for their category by 0.1 seconds, losing out to Surbiton High School Boat Club. In the WJ17 quads the Wycliffe/Henley positions were reversed with the Henley crew of Lucy Jones, Pippa Jamieson, Scarlett Dewar, Ella Dickson finishing two seconds ahead.

The WJ16 quad of Freya Weiser, Tabitha Hall, Gwennie Hunter and Matilda Macartney had a comfortable win with a 21-second victory over Sir William Perkins.

The largest event of the day, with 67 crews racing, saw WJ15 A and B quads finish seventh and 10th, the B boat being the second fastest B boat just behind Surbiton.

The WJ14s had three boats entered and from a field of 36 the A boat of Jemima Butterworth, Molly Hall, Chloe Hughes, Jemima Painter, and cox Florence French, won by a clear 27 seconds, the biggest margin of the day.

Despite the B boat suffering rudder problems it finished in 10th place, with the C boat having an outstanding result of 11th place.