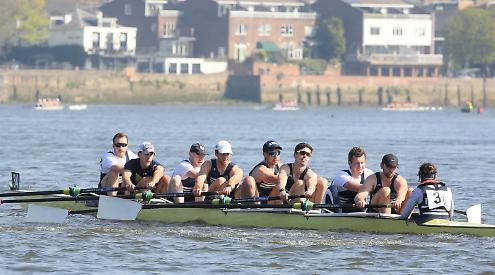 CREWS from Henley’s three rowing clubs were in action at the Head of River Race for a weekend of competition over a four-and-a-half mile (6.8km) course between Chiswick and Putney on the River Thames in London.

The course is the reverse of that in the upcoming Boat Race and the events were the last main head races (held against the clock) of the winter season before side-by-side regatta racing starts after Easter.

The Leander Club boated three eights and was placed second, fourth and 11th out of the 280 crews racing on Saturday.

Preparation had been far from ideal for Leander due to injury and illness with many crew changes happening daily until the race itself.

The club’s high-performance coach Alistair Brown said: “Although losing top GB athletes was disappointing this did give our younger club-based development athletes a fantastic opportunity to race in our lead boats.

“We are of course disappointed not to win but considering the number of athletes unavailable to race the club did well to put three crews in the top 11 and only have one club ahead of our leading two crews.”

The crew judged the pace perfectly and were able to push on in the second half of the race from Hammersmith Bridge. The second eight had a solid row and finished 91st.

Henley Rowing Club A were placed 48th and the club’s B crew were in 284th position.

The women’s eight had an outstanding performance in the masters E category, their time placing them as the fastest women’s masters E and D crew as well as the second fastest C crew.

The crew was stroked by Judith Burne who set a strong rhythm throughout the race, and coxed by Brendon Desmond who steered an uncompromising course.

The crew, made up of Judith Burne, Miriam Luke, Sally Pollok-Morris, Kate Mackenzie, Moira MacCallum, Jo Wilby, Becks Sadler and Naomi Ashcroft stormed down the river, pulling away from York City and catching tideway local crew Mortlake who raised their rate to hold the Upper Thames women off from overtaking.

“We had a hard-fought race and we are delighted with the excellent result coming in second overall once the age handicaps were applied,” said Jo Wilby.

The Pete Jacobs-led men’s masters D crew have been in strong form this winter season with wins at Quintin Head and Henley 4s and 8s Head.

This year the crew is stroked by Luke Moneley with many returners from the crew who qualified and then won a round at Henley Royal Regatta in the summer.

Due to injury, they were forced to make a crew change in the week before the race with Pete Lowe coming in for an injured Jim Burkitt.

The crew had an excellent race and finished ninth overall out of 184 crews and second in the masters D category.

The other Upper Thames men’s masters D crew stroked by Pete McConnell finished eighth out of 15 in the masters D category.