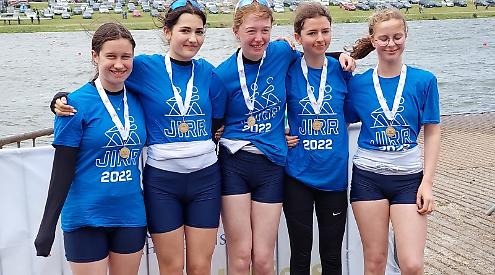 HENLEY Rowing Club juniors competed at their first regatta of the season last Saturday at the National Watersports Centre in Nottingham.

The British Rowing Junior Inter Regional regatta was contested between 12 teams, based on the British rowing regions, with the Thames Region split into its three sub-regions, Henley being part of Thames Upriver.

The format should have been two heats over 1,500m followed by fastest six from heats to A final and the rest to B finals but due to the strong wind making conditions difficult the format was two heats over 1,000m and the medals awarded to the fastest crews across the heats.

Henley had six crews representing the region who had been selected from either trials or the fastest regional crew at the schools’ head for eights events and junior head for quad sculls.

Henley’s Felix Richardson finished fifth overall in the U14 boys single sculls putting in a commendable performance in his first race. The U14 girls’ quad of Jemima. Butterworth, Molly Hall, Chloe. Hughes, Jemima Painter and cox Florence French won their heat by a considerable margin of 27 seconds but in the second much tighter heat Thames London, represented by Wimbledon School, recorded a time two seconds quicker to take the gold.

These two crews then joined together with cox Rose McEwan to win the eights event by seven seconds.

The Henley results contributed to Thames Upriver winning both boys’ and girls’ matches and the overall match.