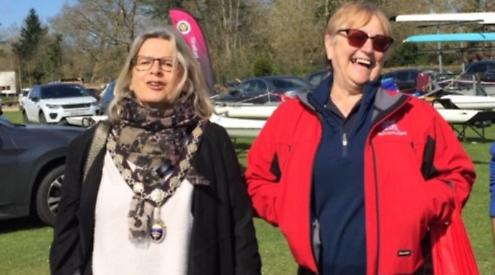 Phyllis Court Club in Henley held its annual time trials event for adaptive rowers. More than 120 people took part in the event, which took place over the royal regatta stretch of the River Thames. It has been held at Phyllis Court since 2016 but had not taken place for two years due to the coronavirus pandemic. Rowers with the best times for their category received a medal presented by Sue van der Veen, who chairs the interest group committee at the club. Henley Mayor Sarah Miller and Mayor of Stratford-upon-Avon Kevin Taylor attended. The Henley Sea Cadets ensured the safety of every participant. Janine FitzGerald, who chairs Phyllis Court Rowing Club, thanked everyone who helped to make the day such a success. Pictured are some of the participants, Sarah Miller with Jo Atkinson and Sue van der Veen with Janine FitzGerald