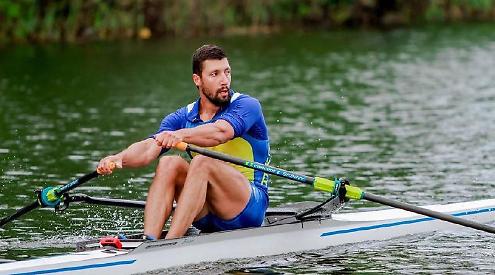 AN OLYMPIC rower from Ukraine and his pregnant wife have told of their relief at having escaped to Britain.

Dmytro Mikhai, 32, and Dasha Kutanova, 28, are living in Nettlebed with the family of Jack Beaumont, a Great Britain rower and former captain of Leander Club in Henley.

The men knew each from when they competed at international regattas.

Mr Beaumont, 28, contacted his friend after the Russian invasion of Ukraine offering his help but it took two months for the couple to reach the safety of Britain.

Now the men are training together at the club and Mrs Kutanova has been able to hear her unborn baby girl’s heartbeat for the first time since the start of the war. Mr Mikhai said he was grateful to Jack and his family.

Mr Mikhai said: “These people have taken care of us, they’re our family. We’re so thankful. We have found the opportunity to be together and we wait for our baby together.”

On the eve of the invasion, Mr Mikhai was in Turkey at a training camp but Ms Kutanova was in the city of Kherson in southern Ukraine. She was staying with her mother after returning from her honeymoon in Dubai. On February 24, Kherson was invaded by Russian troops and there was a battle lasting four days.

Mrs Kutanova said: “We were so scared, we didn’t leave the house. Some people would hide in their bathrooms because there was constant shooting. It was so scary for everyone. Nobody believed this would happen.”

By March 2, Kherson was under Russian occupation.

Mrs Kutanova said: “Some people just took their cars and tried to cross the city. Some were able to but others couldn’t and they returned.

“My mother and I were just staying because we didn’t understand what was happening, I was pregnant and we were so scared. Dyma wasn’t there and neither was my father [who works at sea].

“We didn’t know what was going to happen the next day and we thought maybe it would be all right but then it got harder each day. We were too scared to go into the street because there were Russian troops everywhere.”

She said that some residents had been killed by the Russians when they went outside.

Mrs Kutanova said: “Everybody would say goodbye to each other because they didn’t know if they would survive the day.”

Mother and daughter stayed indoors for a week but then had no choice but to go outside for food and medicine. The troops didn’t touch them but they would stare.

The products in the shops were running out, including medicine, and Mrs Kutanova couldn’t access the doctor and could not have a hospital scan on her baby.

Mrs Kutanova said: “To be honest, I wasn’t thinking about eating or sleeping during all of this because I was so stressed and worried. How can you think about that when you’re in the middle of a war? You cannot live a normal life.”

Meanwhile, Mr Beaumont completed the paperwork to bring the couple to the UK with the help of his father Pete, 57, and stepmother Eira Parry, 52, who live in ????? with their dog Tiggy.

He told Mr Mikhai, who then urged his wife to leave and join him in Turkey.

Mrs Kutanova said: “I couldn’t believe he was saying this because I didn’t think it would get better any time soon. After 35 days, we couldn’t go anywhere. We also didn’t have any petrol left and petrol had run out in the city.

“We were so scared and we couldn’t understand why the Russian soldiers were still in our city because they had killed all the Ukrainian soldiers so why couldn’t we live our lives like normal again?”

A few days later, Mr Mikhai told his wife that the wife of one of his fellow Ukranian rowers was going to be leaving Kherson by car and urged her to go as with her.

Mrs Kutanova said: “I couldn’t believe it was happening, that I could go to Great Britain. I couldn’t believe I could see Dyma again. I thought I was going to stay in my city with my mum and I would have my baby in Ukraine.”

Mrs Kutanova’s mother started crying when she found out that her daughter was leaving and urged her not to go.

But she said: “Well, if I don’t do it now, maybe I won’t be able to go another day and how would it work without petrol.”

At 8am the following day, Mrs Kutanova left with the other woman.

The Russian military at the border posts were suspicious of the pair but they told the troops they were crossing into the next town to give a product to their grandparents and they were let through. They passed four more border posts and used the same excuse at each one.

The travelled for four days and four nights through Ukraine, then Romania which they reached by boat, Bulgaria and finally Turkey.

During their drive, the women saw just part of the damage already caused by the war. The roads were torn and sinking and cars had crashed and been abandoned.

The final border post in Odessa was guarded by Ukrainians who asked if there were any men in the car and if there were, they had to stay and fight.

In Odessa, they found a hotel and rested for the night. Mrs Kutanova couldn’t believe how different it was from where she had come from.

She said: “There were products in the market and people could go out. In Kherson, this was impossible.”

They stayed at a hotel each night so Mrs Kutanova was able to speak to her husband using WiFi.

Mr Mikai had been thinking about going back to Ukraine to be with her and found it difficult to eat and train.

He said: “I didn’t know if we were doing the right thing. I didn’t train until she contacted me again after leaving Ukraine. Once they reached Romania, I felt relaxed again and was able to rest and train.”

Mrs Kutanova said even when the couple were reunited in Turkey she still felt anxious after her experiences.

She said: “I couldn’t believe I was seeing Dmytro again but then for four or five days it was really difficult for me to sleep.

“I would wake up at night thinking we were going to be bombed. He would calm me down telling me everything was all right and that I was in a safe place.

“When he would ask me what I wanted to do during the day, whether to go to get a coffee or go for a walk, it was so strange because for so much time, I hadn’t left my mother’s house.”

She continued to work online for Russian company, tutoring Ukrainians, Russians and Belarussians in English but then her pay was stopped so she gave up.

She said: “I just had to try to rest my mind and convince myself that everything was okay while we waited form the visa.”

Mrs Kutanova received a phone call from English authorities 17 days before her visa arrived. Mr Mikhai’s visa took another nine days due to difficulties with the application system. Mrs Parry explained: “The system was not quite working and then you go on the helpline and wait for an hour and a half and then they don’t understand how to help you.”

“All the Ukrainian team were invited to the royal regatta three years ago but our coach had us training elsewhere and we didn’t come.”

The couple are still in the process of filling out paperwork. They are trying to apply for a biometrical passport to have right to residency for three years as they don’t know if they will even want to go back to Ukraine.

Mrs Kutanova said Mrs Parry helps them with things such as writing a CV, taking medication and creating a bank account and doing the things they need to before the baby arrives in August.

Mrs Parry said: “I can’t even begin to tell you what a positive experience this has been. They’ve just been wonderful — so resilient and brave and grateful. It has just been my absolute pleasure to help them.”

Mr Beaumont said: “I am really proud of my dad and Eira because I’d been complaining when the war started that the EU had been taking refugees and the UK wasn’t and then Eira asked me if I knew anyone from the Ukrainian team who might benefit from moving to the UK.

“At my company, every Monday, we have to say something that we’re proud of and I said I was very proud of my parents for wanting to help with this because I was so sad to know that Dasha was alone and how scared I would be if I was Dyma in this situation.”

Mr Mikhai said: “I love training in this beautiful place, with this amazing club, with such interesting and unique people. It’s a new and good experience for me. I’m not under pressure, I feel free, more relaxed. Right now we’re just thinking about the pregnancy and our future baby. For now, we are here. It is difficult to know what will happen in the future.

Mrs Kutanova added: “To be honest, we don’t want her to see what I saw. We just want a calm, normal life for her.”

They couple said they missed their parent and old life but they understood that the war had changed everything.

Their house in Kherson is still intact but they don’t believe the conflict will end soon.

Mr Mikhai said: “Even if the shooting and the bombing stopped tomorrow, cities have still been taken by Russian people. They have taken down the Ukrainian flag in our city so it’s going to still be bad after the war. People have lost their jobs, their houses and their lives.”

Mrs Kutanova said they were spending a lot of time with Mr Beaumont, who lives in Henley.

She said: “He shows us all around Henley and introduced us to his friends so it feels like we have friends now. He also gave Dyma some of his kit to train in. In the future, he promised us he’ll take us to the theatre in London.”

Mr Beaumont said: “My friends love them. We just want to hang out with them every day. I used to see Dyma as my competition. We used to race each other at international competitions because we both sit in the same seat in our boats so if I looked across it was him.

“Sometimes we would beat them and sometimes they would beat me. We were rivals. Actually, when I was younger, when I was still a reserve in the team, I remember watching him achieve a world record in 2014.

“Now I have two best friends to hang out with every day, it’s so nice. I want them to stay and I’m excited to see their little girl in a few months.”