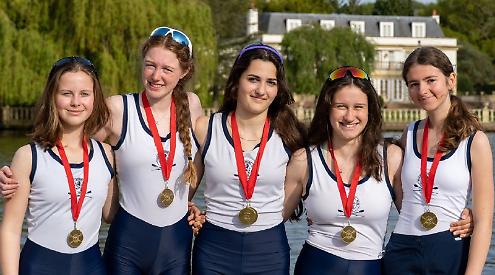 HENLEY Rowing Club and Shiplake College Boat Club had success at a busy Bank Holiday weekend as they competed at three regattas — Marlow Spring, Wallingford and the Junior Sculling Regatta.

Marlow Spring on the Saturday was raced from Bisham Abbey up to Marlow Town Bridge in three waves with boats staying on the water between heats and finals in each wave allowing competitors to compete in more than one event.

The Henley J14 girls competed in quads, octuple and double sculls. In the quads event the two Henley crews beat crews from Headington and Sir William Borlase School to make it an all Henley final. The Henley crew of Jemima Painter, Amelie McDavid, Chloe Hughes, Martha Dickson and cox Florence French came out on top beating their team mates by four lengths.

The two crews then combined in the octuple, and in heats again beat crews from Headington and Sir William Borlase School. In the final, despite breaking a blade in the last 200m, they went through to win against Marlow RC by three lengths.

In the last wave of the day, the J14s raced in doubles winning their heats to make it another all Henley final with Jemmina Butterworth and Molly Hall winning with a comfortable lead of five lengths.

The J15 girls raced in doubles, quads and coxed fours. Both doubles won their heats to again produce another all-Henley final, and against all expectations the double of Lillya Wild and Josie Savin took a half-a-length victory against Nicolette Pagdin and Freya Smith.

In the quads, Annie Hunt, Josie, Freya, Florence Short and cox Charlotte Tong had a comfortable victory in their heat but finished second to Marlow and ahead of Borlases in the final.

In women’s coxed fours, racing above their age group, Wild and Pagdin where joined by Holly Fuller, Jess Mack and cox Nicole Bielinski to win a straight final against Marlow RC and Great Marlow School.

Also competing were two master women doubles who rowed in both divisions while the masters mixed double of Michaela Spritzer and Jan Wildenhain won gold in their event.

Shiplake raced in the J14, J15 and J16 categories, with the year nine (J14s) of Rupert Evans, Will Tavinor, Freddie Coultas, Oli Bennett, Thomas Lane, M Taylor-Fitzgibbon, Rory Campbell, Seb Crehan-Mills and cox Ben Loggie winning their event. Sunday was Wallingford Regatta one of the many multi lane events held at the Eton Dorney Olympic lake. Henley club captain Becci Norman competed in her single scull and despite a good performance just missed out on a qualifying place for the final.

Monday was back at Dorney for the WJ14's who were racing at the Junior Sculling Regatta on a six lane 2000m course. Out of 20 crews entered, Henley qualified their A, B and C crews.

The C crew had a shaky start and fought their way back to grab second place just behind City Of Bristol RC in the B final. The other two Henley crews then raced in the A final. Mima Butterworth, Molly Hall, Chloe Hughes, Jemima Painter and cox Florence French stormed out the blocks at 45 strokes per minute, and had a quarter-of-a-length lead after 10 strokes. They then pulled away to a commanding lead to give them a win by 13 seconds against Wimbledon High School and Headington, with Henley’s B boat finishing fifth.

Shiplake girls took silver in both the quad and double events at the Junior Sculling Regatta held at Dorney Lake.