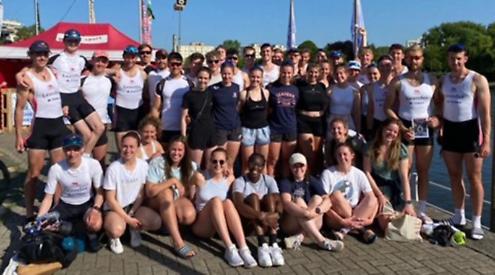 LEANDER Club athletes returned from a two-day trip to Belgium laden with medals after competing in both the Belgian National Championships on Saturday and the Ghent Regatta on the Sunday.

Forty-seven athletes crossed the Channel with Leander securing the Victor Ludorum on the Saturday after winning six events and picking up a bronze in a seventh. Leander’s men’s eight crew of of Ballinger, Todhunter, Vogel, Drinkall, Grisedale, Robson, Graham, Lancashire and coxed by Le Brocq won their event after seeing off strong competition from Oxford Brookes.

The men’s quad sculls crew of Keating, Costley, Ellery and Harris raced well against the Belgian national team to secure their win.

The women’s crews secured four first place finishes. The coxless four of Siddorn, Goosens, Bellamy and Slabbert raced to victory against Tideway Scullers’ School while the quad sculls crew of Harris-White, Olubodun, Magner and Mole were dominant securing their win. Weatherhead and Traux secured the double sculls crown while Perry and Courty won the coxless pairs.

The women’s coxless four were unchanged and repeated their success of the previous day while the women quad of Olubodun, Traux, Weatherhead and Magner sculled well to secure gold. Harris-White and Mole won the women’s double sculls while the coxless pair triumphed once again.

The women's eight made one change of the cox bringing in O’Brien as they collected their second bronze of the weekend.

Meanwhile a gap year boys crew won the B fianl on both days while Alex King and Matt Brigham finished fourth on Saturday and fifth on Sunday in the men’s double.