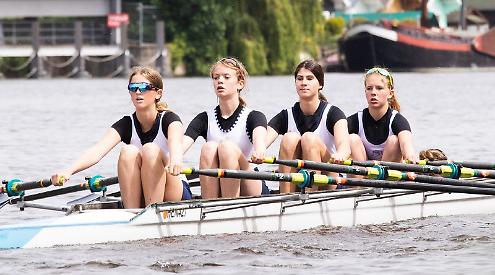 HENLEY Rowing Club’s women’s J14 squad returned from Saturday’s Walton and Weybridge Regatta with three wins while there was also success for the J14 boys.

The regatta was raced over a 1,000m two-lane course.

The first race of the day saw Henley’s B crew coxed quad narrowly missing out by one length to Wimbledon High School.

After winning their heat, the Henley A crew of Mima Butterworth, Molly Hall, Chloe Hughes, Jemima Painter and cox Florence French met the Wimbleden crew in the final where, after a quick start, Henley triumphed by two lengths.

In the double sculls, Lilian Graham and Charlotte Tong put in a good performance in the head before facing Walton RC in the final where the Henley crew won by five lengths.

The final Henley boat to race was the octuple made of the A quad along with Amelie McDavid, Lucy Green, Evie Meeks and Martha Dickson.

Henley once again faced Wimbledon High School and they were down by three feet after 10 strokes. The crews were then even for the first two-thirds of the race, where Henley powered away to win by one-and-a-half lengths.

Elsewhere Henley’s J14 boys recorded their first success. After losing their quad in the morning to Guildford, they set about revenge in the afternoon.

The double scull of Louis van der Mark and Ed Flood lost narrowly, but the other double of Felix Richardson and Harry Catlin beat both halves of the Guildford quad in successive races, winning the final by a length.