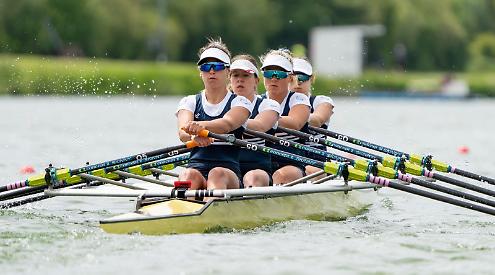 The Henley-based club have recently returned from a week long training camp at Cerla Rowing Centre in North-West Spain. On Saturday racing over 2,000m at Nottingham City Regatta, the men’s senior squad entered two coxless fours in the morning division, with the crew of Dale Buckett, Matt Cummings, Tom Hole and Steve Griffiths winning the event.

In the afternoon, the members of the winning coxed four came together with Oliver Collinson, Rory Cameron-Martin, Alastair Harsant and Chris Gilligan to form an eight, which finished in third place.

In the men’s pairs events, the Upper Thames crew of Dai George and Lachlan Reid finished third in the morning division, while Matt Cummings and Steve Griffiths took the win in the afternoon band one pairs race.

The club had three single scullers racing with Tom Foster winning the men’s band two even comfortably. In the women’s singles, Meghan Jackson lost out in her heat to the eventual winner, while Naomi Holland progressed through their heat to finish third in the final.

The women’s senior squad entered a quad in both divisions, winning each event in a straight final. Yasmin Ryman-King, Teuntje Tijssen, Daisy Hampton, and Alice Pickthall raced in the morning, while Meghan Jackson, Lucy Ryan, Eve Wright and Courtney Edmonds raced in the afternoon.

Edmonds also raced with Sian Hinton in the morning division women’s double sculls event. The crew finished second in a straight final, losing out to a crew from Peterborough.

In the afternoon, the women’s squad had three doubles racing, with the crew of Teuntje Tijssen and Naomi Holland winning their heat and going on to finish sixth overall.

The crew of Eve Wright and Lucy Ryan finished second in the women’s pair event, after only a short time rowing together.

Sculler Naomi Holland also competed in the Nottingham Club & Masters Regatta on the Sunday, finishing second in the women’s band one single in a tight race in which all scullers finished within the space of just 2.5 seconds. Also competing in a single was sculler Bob Gullet, who finished third in the masters G/H/I single event having declined the advantage of an age handicap start.

In the men’s masters H double, the crew of Clive Cooper and Jeremy Dobbins won their event with a commanding lead over the opposition. Cooper and Dobbins were then joined by Bob Gullet and Derwent RC sculler Lewis Hancock to race as a composite masters H quad where they won the G/H event.

The last racing Upper Thames crew of the weekend was a mixed masters F quad of Cooper, Bromilow, Holland and Dobbins. Rowing together as a crew for the first time ever, they finished second in the masters E/F/G quad event.