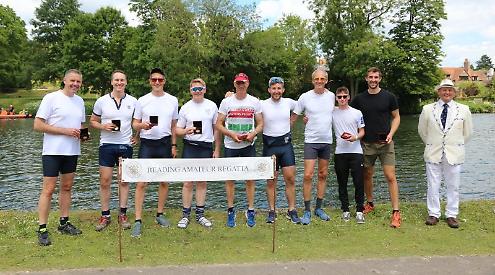 UPPER Thames had eight crews racing at both the British Masters Rowing Championships in Nottingham and Reading Amateur Regatta last weekend where they picked up seven wins as well and silver and bronze medals.

The Upper Thames crew edged out Tees RC in a close race for the bronze and silver medals.

On the Sunday the masters D (average age 50) four of Nick French, Gareth Morris, Steve Kelso and John O’Donohue raced in both the coxless and coxed events. After a strong win in the heat they had high hopes for the final but after some poor steering off the start they left themselves too much to do finishing in fifth place.

In the coxed fours they were coxed by Jonny Fieth, ex-Abingdon School and president of the University of Nottingham Boat Club. In a competitive final the Upper Thames crew took bronze behind York RC and Kingston.

Sally Markham, rowing with Ailie Ord (Strathclyde Park), raced in a composite and won gold in the women’s masters E double scull on the Saturday and repeated the success in the masters E coxless pair event on the Sunday.

At Reading Amateur Regatta on Sunday Upper Thames had a 100 per cent success rate with all four crews winning their events.

Beaumont then jumped into the masters C eight, who despite having to give their opponents from Twickenham RC an eight second age handicap at the start, were able to row through to victory in a quick time.

Finally, the masters D quadruple scull of Mark Shimmin, Hamish Floyd, Eric den Besten and Adam Rennie saw off Reading RC in the heat and then defeated the crew from Dusseldorf in the final.