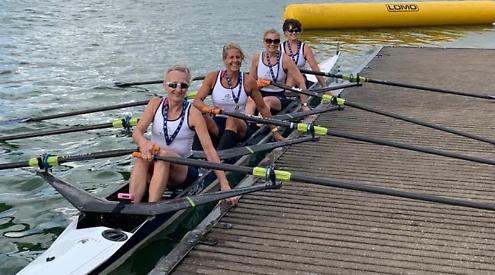 HENLEY Rowing Club crews of all ages were winning events across the country last weekend with the youngest J13 crews at Reading Regatta to the Masters in Nottingham.

It was a successful day’s racing for the masters squad at the British Rowing Masters Championships held at Holme Pierrepont, Nottingham, on Saturday.

Racing a course of 1,000m, first off the starting line was husband and wife team, Jan Wildenhain and Michaela Spitzer, racing in the mixed masters C category double sculls.

Their final was timed with torrential rain and a strong headwind but the duo put in a strong performance, being in bronze medal position at the 500m mark but just missing out on the medal by dropping to fourth place.

The pair then joined forces with another husband and wife partnership, Sean and Jo Paice, for the final of the mixed B/C category quad sculls. It was bow steerer Jo Paice’s Nottingham debut and she steered a good line in challenging conditions to finish fourth.

The final race of the day was women’s E category quad sculls with Henley represented by club chairman, Helen Turnell at stroke, Niki Orr at three, Louisa Clarke at two and Sarah Girling steering from bow. Rowing into a fast direct headwind, the crew were slightly behind off the start but powered through to win gold by a comfortable margin of more than three lengths ahead of Stourport BC and Eton Excelsior.

A large contingent from Henley competed at Marlow Town Regatta on Saturday which was raced over a 900m three-lane course.

Both Henley J14 girls’ quads made it to the final along with AB Severn Boat Club, who finished at the National Schools Regatta three weeks previously.

The crew of Jemima Painter, Amelie McDavid, Chloe Hughes, Evie Meeks and cox Oscar Mackenzie led from the start, winning by three-quarters of a length against their team-mates who were two-and-a-half lengths clear of AB Severn. The winning quad was then joined by Lucy Green, Lilian Graham, Charlotte Tong, Molly Hall and Mima Butterworth, with Meeks taking the cox seat to race in the octuple. They won their heat and went on to beat Headington School in the final by four lengths.

For the boys, Monty French, Henry Gould, Sam Hunter and Connor Simpson won J16 quads beating Sir William Borlase by half a length in the final.

Reading Regatta on Saturday was run in two divisions in the morning and afternoon over a two-lane 1,500m course and this is where the girls’ J15 squad and senior women elected to race.

On the Sunday the course at Reading was reduced to 1,000m and again was split into morning and afternoon divisions.

For the youngest Henley competitors both the girls’ J13 quad and boys’ J13 quad won their events — the girls beating Wimbledon High School in the final and the boys beating The Langley Academy.

Up an group both J14 girls’ crews crews made it to the final once again, with the crew of Mima Butterworth, Chloe Hughes, Lilian Graham, Evie Meeks and cox Molly Hall beating their team-mates for the medals. The J14 boys also triumphed with the squad of Felix Richardson, Ed Flood, Harry Catlin and James Mumford with cox Louis van der Mark racing well. Their first two races, both against crews from Reading Blue Coats School, were dealt with comfortably. In the final they faced a crew from the squad that came third at the National Schools Regatta but but they eventually came out on top.

Richardson went on to race in a single scull in the afternoon but narrowly lost the semi-final to the overall winner.

In the J15 age group Josie Savin and Freya Smith beat their team-mates and the previous days winners of J15 double sculls Lilya Wild and Nicolette Pagdin in an exciting final that saw the winners come from behind to take the win.

For the J15 boys, Zac Jenkins won his final in in the single sculls. This event was split into three bands. Jenkins’s time of three minutes nad 47 seconds was the fastest time of the finals by five and 10 seconds.

The seven wins at the regatta resulted in Henley being the most successful club and taking home the Victor Ludorum Trophy.