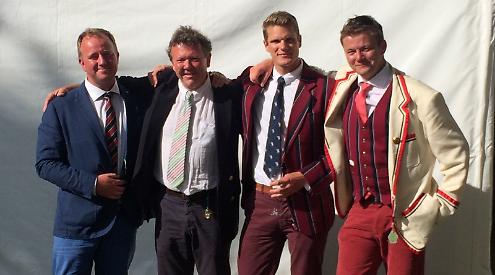 HENLEY builder Richard Spratley has achieved much more off the water than he did on it, even as a good quality rower.

He has been director of rowing at Oxford Brookes University Boat Club for 31 years and has transformed it physically as well as a competitively.

Thirteen of its athletes have gone on to win Olympic medals, six of them gold, and the club achieved its biggest haul at last year’s Henley Royal Regatta.

Not only that, but it now has a state-of-the-art boathouse.

Yet when he joined the club as the sole coach 31 years ago, there were just two boats and 15 ergometers for the 15 male athletes.

Spratley, who lives in Hambleden, says: “I feel very proud. We could never have imagined building a team like this from its fledgling roots.”

“There really is a huge pride and satisfaction in building this team,” he says. “The inference is that this is a one-man show but it is the opposite of that, this is an Oxford Brookes show.

“It is the labour of love of many people and I have just been fortunate to be their leader. The moment you stand still, you are going backwards — we have to keep raising the bar.

“But I’m not finished by any stretch of the imagination. I’m a very fit
61-year-old and I love what I do. I just want to keep enjoying it and keep working hard.”

Spratley was born in Henley and raised in Fawley. He fell in love with rowing after his mother Margaret took him to a taster session at Henley Rowing Club when he was 13.

His father John ran his own architecture firm for 60 years and his mother worked as a personal assistant as well as raising four children.

He has two younger brothers, Jeremy and Andrew, and an older sister, Ann. He has two children of his own, Joseph, 22, and Max, 20.

Spratley has run his own building company, Rockwell Design & Build, for the last 15 years. Before that, he worked together with his father and brother Jeremy, who is an architect in his own right.

He launched Spratley Studios in 2003 and it is now known as Spratley & Partners. The firm helped design the headquarters of watchmaker Bremont and the current facilities for Oxford Brookes.

After attending Sir William Borlase’s Grammar School in Marlow, Spratley went to Reading College to do a diploma in building and civil engineering.

He moved from Henley RC to Leander Club when he was 18 as there were not enough people of his age who were at the same standard.

He went on to row at regattas across the world and raced on finals day at Henley in 1982, competing in the Thames Cup.

After enjoying nearly 10 years with Leander, he decide stop rowing.

“I was never good enough to be an international rower,” he says. “I was probably a little slight to be at that level. I wasn’t big enough to be in the world championships, or the Olympics, or win at Henley. That made my heart work even stronger to achieve success in the sport.

“At that time, I was very keen to establish myself as a builder and I started my own business when I was 27. My father was retiring.

“We started a small housebuilding company and built three or four houses in the first year, 1988. We did lots of work together and that lasted right up until five or six years ago when he wanted to take a backwards step.”

He used to live in Bix but about 18 months ago moved into his parents’ house in Hambleden following the death of his father in May last year at the age of 93.

Spratley, who had built the house, says: “My dad was well right up until he was 91 and then he had a major stroke and brain haemorrhage, which could have killed him. The hospital said he was a strong 91-year-old and he had a brain operation, which alleviated the symptoms. He got better but he was quite fragile.

“He had another stroke and he passed away last year. My mother wanted to move somewhere smaller, so I had the opportunity to buy the house. It is very poignant to live in the house that my mother and father lived in all of those years, having built it for them.”

When Spratley joined Oxford Brookes as coach at in 1991, he jumped at the opportunity.

He recalls: “One of Jeremy’s best friends was a chap called Pete Lowe, who lives in Hare Hatch. We got chatting and he knew that I was fairly talented as a rower.

“He was starting a fledgling rowing group. They competed at Henley Royal Regatta in the inaugural Temple Challenge Cup and got into the quarter finals and then the semi finals but they were still a long way off
winning.

“We had a discussion to see if I would be interested in coaching. It gave me a goal to focus on and allowed me to get back into rowing.”

Spratley says there have “springboard” moments in Oxford Brookes’ development.

The first was in the Temple Challenge Cup at Henley in 1992 when the university eight was knocked out followed an equipment failure mid-race which meant one man could no longer row properly.

Despite this, they lost by only 3ft and the coach knew this was a sign of better things to come. He says: “It was like being at the bottom of Mount Everest. It hardened the mindset of the guys in that crew who had another year of studying.”

Oxford Brookes went on to win the trophy the following year, beating Trinity College Dublin. “We won by four lengths — nobody could touch us,” says Spratley.

The club was starting to attract more young athletes and was seen as a place to develop.

By the new millennium Oxford Brookes had won eight more trophies, including another victory in the Temple Challenge Cup in 1995 as well as the Ladies Challenge Plate and twice in the Visitors’ Challenge Cup at Henley.

At the time, Spratley was awaiting the arrival of his first son and remembers feeling under pressure to deliver as a coach and a father.

He was helped by Jürgen Gröbler who became Team GB’s head coach in 1991 and presided over a golden period until his retirement in 2020, coaching the likes of Sir Steve Redgrave and Sir Matthew Pinsent.

Spratley says: “I can clearly remember having a lovely discussion with Jürgen in the autumn of 1999. He put his arm around me and said, ‘Richard, I will do all I can to help you’. He respected me as a coach and he would do everything he could to support me.

“I wouldn’t say I became a good friend but I was an ally for him. He trusted me to bring athletes through into the senior GB team.

“Within two months I had a phone call from Sir David Tanner, the old performance director. He said he wanted to start a high performance programme and he funded an assistant coach for Oxford Brookes. We were the first rowing team to receive funding from British Rowing for that
position.”

In 2005, Peter Haining, a three-time world champion, came on board as assistant to Spratley, who says this was key to the club’s development for both men and women.

The university started to attract the “top talent” and won medals more regularly at Henley.

In 2010, Henry Bailhache-Webb, who is now the head coach, joined the club as assistant coach, which was another “springboard” moment. Spratley says: “It became apparent within two years that he was very driven, diligent and he had great man management skills with all the athletes.

“Within four years, I didn’t see him as my assistant, we were more like partners and our collective skills have taken Oxford Brookes to the size it is now.”

During this time Spratley put his skills as a builder and his father’s architectural knowledge to good use.

Oxford Brookes had historically rented space from Wallingford Rowing Club at Cholsey but with success came the need to grow.

By 2010, it became apparent that the facility was too small and Spratley Studios was commissioned to design a boathouse three times the size of the one built in 2006.

Construction started in 2014 and involved knocking down the old one.

Spratley says: “I saw every brick and blade of grass go in and we now have the best fleet of boats in the country and probably the best boathouse in the country. We have a team of four dedicated coaches and two full-time strength and conditioning coaches.”

He became director of rowing in 2013 and Bailhache-Webb became head coach.

Spratley explains: “It became more and more apparent that Henry was more than capable of running the coaching side in his own right and that my skills were better used on the infrastructure and the facilities.

“It was a natural amalgamation of skills as a builder and my relationship with British Rowing.

“Every year, we have tried to build the rowing team. Last year was probably my most enjoyable year and winning the Grand Challenge Cup at Henley brought a tear to my eye.

“It is one of the three blue ribbon events in rowing. To be achieving that sort of success after those fledgling years is tremendous.

“Another thing that brought a tear to my eye was on the Saturday night. Members of the old guard from 1993, alongside Henry, dedicated our new boat to me, which our men’s eight then won the Grand Challenge Cup in on finals day.

“We poured a glass of champagne over it and some very nice words were said. There were some quotes from Sir Steve read out. He took great pride and enjoyment in seeing the strongest programme in the world develop over the years.”

Although Oxford Brookes’ success on the water is held in such high regard, Spratley hopes to see the club take things even further.

He wants to set a new course record at Henley for the Grand Challenge Cup and produce a predominantly Oxford Brookes crew that goes on to win an Olympic gold medal.

He would also love to play a part in helping Team GB’s preparations for Paris 2024 after a disappointing return at Tokyo last summer.

“It wasn’t a good year for us at the Olympics,” he says. “I would very much like the opportunity to use my skills and knowledge in the British set-up if I was asked. That would be a new level but I would love to be involved.”