The Americans at Henley 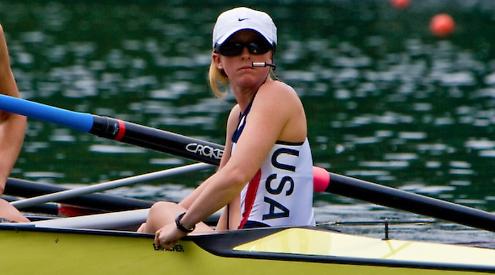 SINCE 1839, Henley Royal Regatta has been a stalwart in the British social and sporting calendar.

The annual (now six-day) event can best be described as genteel, where spectators gather along the banks of the River Thames, chatting to old friends in the hot summer heat as rowers glide by.

The rowers themselves range from Olympians to secondary school students who compete for trophies along the same bit of river. Many of the attendees have a tie to rowing and many of them are British.

However, my fellow compatriots from the States make up a small yet significant component of the
congregation.

But who are the Americans who attend, why are they there and what do they make of this most British of events, one which often coincides with our Independence Day?

Aquil Abdullah, who is the first African-American steward at Henley, will be wearing the jacket for Manley Crew, which represents the first all-black high school rowing team in the USA, one highlighted in the recent documentary A Most Beautiful Thing.

“The regatta is steeped in so much history and tradition,” he says. “It’s fun to be a part of and to see the old guys with jackets from 60 years ago that are threadbare still supporting their high school.

“I really enjoy the pomp and circumstance. It’s not something that you get to participate in every day.”

This will be his first year as a steward.

“I am both excited and a little bit frightened,” he says. “When Steve [Redgrave] gave me the call and told me that I had been tapped for this role, I saw it as something that was really fun but also with great responsibility for a regatta with such history. Being tasked with carrying it forward and maintaining and expanding it for generations to come is not a small responsibility.”

Of the record 739 entries in this year’s regatta, just over 30 are from America. A handful of these are secondary school students, what we call “high school” in the States.

Dara Alizadeh rowed for his high school in Massachusetts and went on to compete in the 2019 Boat Race (when he was Cambridge University president), the 2020 Olympics (representing Bermuda in the single sculls) and at Henley in the Diamond Sculls Challenge in 2021.

However, the trip is also prohibitively expensive and logistically challenging for many teams in the USA. They must either ship over or borrow boats to compete in and fly their team over, often at short notice.

Joe McMullin, the coach, says they have been working towards their goal since September but it wasn’t until recently, after back-to-back wins at both the Stotesbury Cup and the SRAA nationals in May, that the team found out they were Henley-bound.

Almost immediately, a GoFundMe page was set up and the DC rowing community came forth to help, raising more than $56,000 (£45,000) for the team to attend Henley.

The team is thankful for the generosity of the UK rowing community as they will be borrowing their boats from Shrewsbury School, where they are spending the week leading up to Henley training.

In total, 12 students and 19 parents will be attending this year.

“They’re so excited to go,” says Joe, adding that the team starts racing on the first day. All international crews get access to the stewards’ enclosure, the more formal members’ enclosure and the one with the best finish-line vantage point, which allows them to partake in the post-racing festivities.

Coxswain Mary Whipple, three-time Olympic medallist for Team USA and part of the crew that won the Henley Prize in 2000, loved attending.

“It’s a really fun mix of doing what you love but then getting to celebrate in a way that you rarely get to,” she says.

“It’s just a really special and fun time to see everybody you have just competed against in their sweaty uniforms and see who they are when they are putting their best foot forward.

“The last day, when you’re a winner, is the best day ever because you get to go into the enclosures, you can have your Pimm’s and you can have lots of champagne.”

In America, our rowing events lack the pomp and circumstance of Henley. Even at the Head of the Charles rowing competition in Boston, for instance, people will show up in casual wear.

Alison Wycinowski, whose husband Giles Maund is a steward at Henley, likens it to the Kentucky Derby, known for its horse racing, mint juleps and where hats are the sartorial focus.

Diana Webster, a Henley attendee who hails from New Jersey, adds: “But even then, because of the geography of America, only people in the area can easily go to the Kentucky Derby.

“For everybody else, they’ve flown in. Whereas at Henley you just hop on a train, go and take your picnic, sit and watch some rowing and just be a part of it. It’s just more accessible for the greater public.”

The first time I attended Henley in 2019 with my now husband James Cracknell, I wandered along the banks of the river to where the boats were being stored. It was July 4.

The banks were busy with rowers and spectators. A man then came forward dressed like our Uncle Sam, that is with the red striped trousers, the blue jacket and the red, white, and blue striped top hat with stars attached to the brim. It was a surreal moment.

Notably what he was wearing was within the dress code of stewards. These guidelines allow both men and women to express themselves in an almost artistic way and as a result the riverbanks are filled with multi-coloured jackets and
millinery.

Liv Coffey, a three-time world champion, 2018 Boat Race winner, 2020 US Olympic athlete in the eight and winner at Henley in 2017 in the women’s quad, will be attending this year as a spectator for the first time, wearing her New York Athletic Club jacket. She says: “I think the dress code is really fun and I like that people push it to the extreme. It’s meant to be formal jackets and long dresses but it’s colourful jackets and colourful dresses.

“It’s an opportunity to share an affiliation via a programme. To me, it’s like I walked on to a Mary Poppins set, like Mary Poppins does rowing in one of the most beautiful venues that rowing has to offer.

“If you’re in any way associated with rowing, you’ll find somebody there with whom you have mutual contacts. And so you’ll always find a group to hang out with when you’re there.”

Patrick Lindon, from northern Virginia, who has attended Henley for 10 years both as a competitor and spectator, likes the dress code.

“I think it’s great,” he says. “As a man who does not do well in the heat, I suffer in the years in which it’s really hot.

“Luckily, stewards has kind of taken a better view on that in recent years in terms of allowing men to remove their jackets when it reaches a certain temperature.

“Overall, I think it’s great. It’s not, say, cost prohibitive for people to wear a jacket. I think if I had to have a morning suit and a top hat, things like that, that might be a bit more restrictive.

“For me, I think the dress code just gives you a sense of elevation over any other event within the rowing calendar.”

This year, Dara Alizadeh will seek permission to wear the traditional Bermuda outfit, consisting of a jacket and Bermuda shorts, which are typically banned.

He says he is hoping for an exception due to it being his national dress. If unsuccessful, he can choose between his CUBC jacket or his kaleidoscopic archetypal jacket.

Meanwhile, Alison Wycinowski says: “I do appreciate that women are being given the option to wear trousers. They are still keeping the formality of the event, like no jeans, but recognising that not all women want to wear dresses and skirts. Some people just don’t, it’s not their style at all.”

So who will the Americans be cheering on this year?

Diana Webster says that she gets there early to cheer on all the American teams.

“I love shouting for the American college team,” she says. Liv Coffey will be cheering on her former teammates on the US national team. And sometimes it is the sound of American voices, raised in exuberance for their teams, that among the Pimm’s, the colorful attire and with the warm embrace of British hospitality at this special event, is the most touching and welcoming for all the Americans who attend.

• Jordan Cracknell has written about rowing for the University of Cambridge Judge Business School (where she received her MBA) and for The Tab. A New York native, she has worked in finance since 2007. She is married to the double Olympic champion James Cracknell.