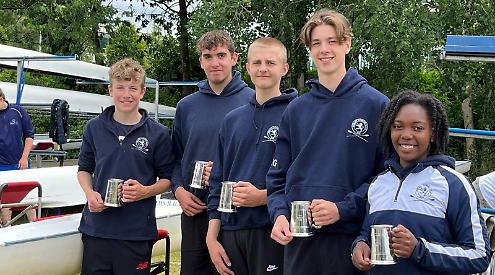 The sprint regatta, was raced over a 500m course on Dreadnought Reach behind Sutton Business Park in Reading.

The youngest Henley squad, the J13s, the girls beaten in the first round by a crew from Guildford Rowing Club. However, Henley’s first boat crewed by Amy Scott, Agnes Chapman, Roxanna Schoenmakers and Lauren Pollard with Martha Hart as cox went on to win the event beating Kingston Rowing club in the semi and the Guildford boat in teh final.

The mixed crew in the boys’ J13 division were beaten by a strong Guildford rowing club crew in the semi final.

Henley comfortably won their first two races but had to work hard for victory in the quarter finals against Windsor Boys School by just under a length. The semi-final saw Henley lose out to Guidlford by half-a-length.

The event had eight other crews in the division and three rounds to race. The Henley girls won all three rounds by more than two lengths to claim victory. The afternoon saw Mima Butterworth, Lilian Graham, Chloe Hughes, Jemima Painter and cox Eden Kent move into the quad to race against 12 other crews.

The quarter-final was their toughest race against a fast crew from Pangbourne College. Pangbourne had the better start but Henley drew level and got their noses in front to win by a canvas.

The final was another close one with Henley just beating Guildford by two-thirds of a length.

On their way to the final, the Vikings overcame opposition from Barn Elms RC and Emanuel School and beat Wallingford RC in the final.

This was the second regatta win of the season for the J14s squad, having won previously at Maidenhead Regatta in their first year of racing.