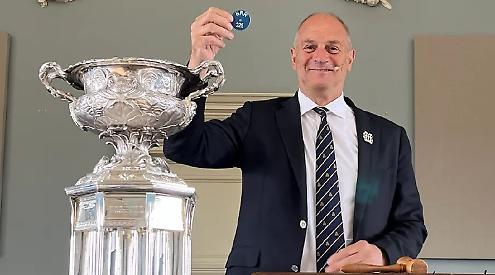 Competitors from around the world attended the annual event, which starts tomorrow (Tuesday) as they waited to find out who they would be facing.

But some coaches were unable to take a seat in the Queen Elizabeth II hall as social distancing in the wake of the coronavirus pandemic was enforced.

Regatta chairman Sir Steve Redgrave drew names from the Grand Challenge Cup for each of the 26 events, which attracted a record overseas entry from 16 nations, including Ukraine, Australia and the USA.

Sir Steve said: “Across the board, the depth in quality is immense. We’ve got some old and new home favourites and a huge top quality international entry, which always adds tension to the draw.

“You don’t know who is going to win but what you do know is that you’re not going to travel all the way around the world unless you think you’re going to be reasonably quick – but we’re not sure what reasonably quick means yet.”

The field of 419 crews for the first six-day regatta, includes 12 Olympic gold medallists from Tokyo, five from New Zealand, four from Australia and three from China.

Emma Twigg, also racing as Waiariki Rowing Club, won gold in Tokyo and is favourite for the Princess Royal Challenge Cup. She won the previously in 2009 and 2019.

Twigg was drawn in the same half as Magdalena Lobnig, of Austria, racing as Völkermarkter Sport-und Turnverein 1868, who won bronze in Tokyo.

In the Queen Mother Challenge Cup (men's quad sculls), the rebuilding British quad have drawn the Chinese national rowing team, who won the first and second World Cups this season.

Dmytro Mikhay, Ukraine’s former world champion in the men’s quadruple sculls, will race for Leander Club, and has been drawn in the opposite half to Zeidler.

The Silver Goblets and Nickalls’ Challenge Cup (men’s pair) has promise of another GB and New Zealand showdown. Britain’s top pair, Ollie Wynne-Griffith and Tom George, are on the opposite side of the draw to Matt Macdonald and Tom Mackintosh, racing as Waiariki Rowing Club, who were part of NZ’s Olympic gold medal-winning eight from Tokyo.

Great Britain’s new men’s eight, racing as Oxford Brookes and Leander Club, are favourites to win the Grand Challenge Cup (men’s eight), but will have to overcome crews from Australia and the USA.

In the Prince Philip Challenge Trophy (junior women’s eight), favourites Henley Rowing Club are on the opposite side of the draw to two leading Australian schools, Melbourne Girls’ Grammar and St. Catherines.

Meanwhile, in the Princess Elizabeth Challenge Cup (junior men’s eight), holders Eton College remain strong favourites, winning four of the past seven editions, are in the other side of the draw from King’s School Parramatta, which is said to be fastest schoolboy eight in Australia.

The draw follows a day of qualifying races on Friday where 387 crews competed in a time-trial format over the 2,112-metre Course for 88 places.

Some big names were required to qualify and some did not make it, including the Cambridge University four in the Town Challenge Cup (women's coxless four), which included four members of the eight that won the 2022 Women’s Boat Race.

Sir Steve said: “The level of the competition in the qualifiers emphasised the standard required to make it into the regatta. Big names and past performances do not guarantee entry to the regatta.

“Traditionally we have selected certain crews in the draw for a number of the events. The purpose of this is to achieve the fairest and most satisfactory racing programme. Crews may be selected because we believe them to be the fastest in their event, or because we wish to keep apart overseas crews from the same club or country or for other similar reasons.”