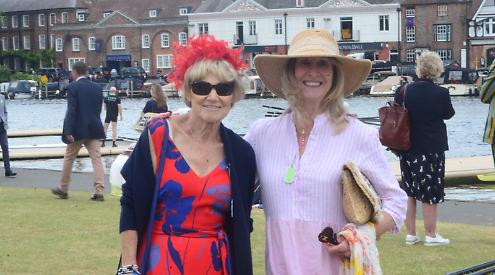 THOUSANDS of visitors flocked to Henley this week for the first day of an historic royal regatta.

This is the first time in the event’s 183 years that is has been held over six days and it began on Tuesday, a day earlier than usual.

The regatta was due to be extended last year but the plans were put on hold when it was scaled back due to the coronavirus restrictions.

However, the pandemic seemed to be a distant memory this week as droves of spectators watched races from the stands and enjoyed picnics on the riverbank.

This year has also seen a record 739 entries from 17 nations.

Sir Steve Redgrave, chairman of the regatta, said: “So many people in the rowing world seem to have missed the regatta so we have a massive entry this year, especially in the open events. Yes, we had an event last year but at relatively late notice for the crowds as it was later in the year than normal.

“Tuesday went really well. We knew we would have enough quality racing to put the day on. Most of the semi-finals are on Saturday and the finals are on on Sunday.”

A record 739 crews from 17 nations, featuring 12 gold medallists from the Olympics last year, will be competing for honours at this year’s regatta.

Andrew Imlay, from Wargrave, who has been coming to the regatta for 40 years, said: “Obviously my focus when I was younger was slightly less on the rowing and more on the bar tent. Those early regattas are all a bit of a blur now.

“Not very much has changed since I’ve been coming here. The layout is slightly different but apart from that, it has all remained relatively similar. The only thing that has changed is the drones you see whizzing up and down the river. I find them deeply irritating.

“I always normally come for the weekdays as they are bit quieter. They are also more for the rowing purists.”

Deborah Abbot, from Turville, has also been coming to the regatta for about 40 years.

“I always have such a wonderful time,” she said. “I’d say I come more for the crowds and the spectacle rather than the rowing. It is marvellous to see everyone dressed up. I do try to watch a couple of the races. That way it doesn’t feel like I’m just at a fancy garden party.”

Nigel Read, 73, from Nettlebed, has missed only one day of the regatta in 55 years and twice won medals.

He said: “I had to miss a day  in 2010 for my daughter’s graduation. It’s better than when it first started. They thought it was going to die but it took off again in the mid-Seventies.”

Tony Bingham, with whom he raced with in 1967 for Thames Rowing Club, said: “We lost first time out but had a great regatta in the bar.”

Martin Lorenz, 89, from Wargrave, has been coming to the regatta since the Seventies.

He said: “I used to come every Thursday. My wife, who was a wonderful cook, would prepare a picnic to have by the river.” He said the regatta in those days was a social event and recalled one year when he overheard a “well-spoken lady” being surprised to learn that Henley “was on the river”.

James Conway, from Benson, who competed in the Thames Cup for Norwich Rowing Club in 1980, said: “It is wonderful to be watching rowers competing in the same event that I raced in all those years ago.

“I’ve been coming back ever since and I love it more each year. I am only here for Tuesday, Wednesday and Thursday, and maybe Friday, as I feel it all gets a little rowdy on the weekends. The weekdays are really for the rowing fans, whereas the weekends seem to be more for tourists and people wanting to just have a good time.”

Paula Edington, from Wargrave said: “It’s wonderful to be here and great to see Henley back in force.”