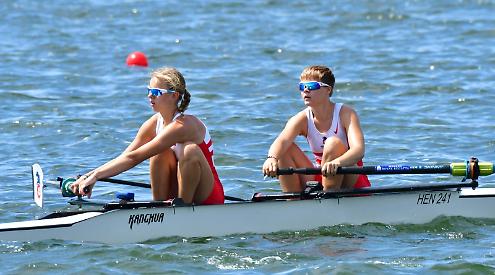 TWO Henley Rowing Club girls picked up gold medals for England at the Home International Regatta held at the Royal Albert Dock in East London last Saturday whilst a Shiplake College student picked up a silver and two bronze for Wales.

The race — taking place for the first time in since covid restrictions — saw senior, junior and para crews from England, Wales, Scotland and Ireland compete in all types of boat classes across the 2,000m course as well as a newly added 500m sprint. Henley’s Anna Merrit and Tabitha Hall were selected in the Junior Women’s Pair to represent England.

The crew, having had very few sessions together at the end of a long season, clicked quickly and found speed and won the trial held the week before at the same venue by a four seconds.

The crew got off for a clean start on some rough water and found themselves half a length down on the Welsh crew. The Henley girls held their nerve and found their rhythm making a push in the second 500m which saw them edge two lengths clear.

From there they controlled the race and finished 10 seconds ahead of the second-placed crew in a dominant display.

The duo then moved into the England composite eight made up of athletes from the other qualified junior women sweep boats. A fast and furious start saw the crew pull out to a two second lead at the first 500m marker where they continued to row away from their home nation rivals.

Meanwhile Shiplake College’s Megan Hadfield secured silver for Wales in the junior coxless pair and bronze in both the junior single sculls and junior quad sprint.

England won the match overall, winning all four trophies for senior and junior men and women for the first time since 2013.