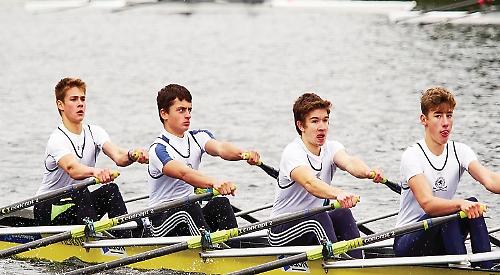 HENLEY Rowing Club continued their good run of form last Sunday as they hosted the Henley Sculls where they walked away with 13 wins on a day that saw Upper Thames secure four victories.

More than 540 crews entered this year’s event when they had chance to rub shoulders with double Olympic gold medallist James Cracknell OBE who was making first return to sculling since 2003 where he triumphed in the Masters C single sculls.

Henley’s club captain Stan Admiraal won the Intermediate 2 single sculls, beating a field of 15 boats and powering through to a 14 second lead over the second place finisher. Admiraal then joined a quad boat in the afternoon and helped push them to victory in Intermediate 4 coxless sculls.

The successful WJ18 quads, also delivered double sculls wins in the J18A and women’s Intermediatte 3 with some of the crew members winning the J18A double sculls. Having already competed in a winning quad, Helen Robinson-Ranger went on to win the J18A single sculls and the overall prize of fastest girl in the whole event.

Swinburn also raced in a single and was one of 19 scullers, and was narrowly beaten into second place by only two seconds by a sculler from Reading Rowing Club in a race where the lead was exchanged several times.

Bruce Turnell, shortly to take part in the GB Early ID Assessment for juniors over 5km in Boston, Lincs, put down a good marker by coming second in a field of 56 scullers in the J18 single sculls.

Henley’s J16 girls also delivered some impressive results. Sophia Hahn beat 21 other scullers in her single, with the second place being 29 seconds behind. Hahn then jumped into a double scull in the afternoon with Amelia Crick and triumphed over a field of six other competitors.

The other J16 quads came fourth and fifth in a field of 11, with only four seconds between them and nine seconds behind the winners.

Upper Thames also had success as they picked up four wins and had the fastest female sculler on the day.

In only her second sculling head race Mary Merritt-Smith won the Intermediate 2 single sculls and also an additional prize for being the fastest woman sculler. Tom Carter, recently returned from placing third at the Head of the Charles regatta in the USA, won the elite sculls by a considerable margin. In the Masters events Adam Rennie and Dan Sadler comfortably won their Masters double sculls event in a fast time and Tim Lincoln continued his winning form in the 75-year-old Masters category.