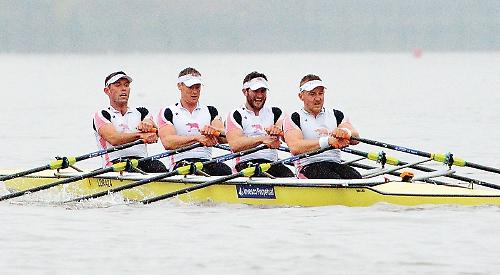 LEANDER crews dominated the Fours head on Saturday with four crews in the top five on the river. The club’s athletes won five class pennants as well as the overall title, with the leading Leander heavyweight quad crossing the line 12 seconds clear of second-placed Imperial College.

Miserably cold, wet weather greeted the 450 crews as they contested the traditional four-and-a-quarter mile championship course down the Thames from Mortlake to Putney. The winning crew had three Olympians on board including Rio finallists John Collins and Jonny Walton as the stern pair. Last minute quad substitute Jack Beaumont occupied the bow seat, with his fellow Henley winner Nick Middleton at two.

Three more Olympians made a switch from sweep to sculling for the event, with Rio gold medallist Will Satch contesting the second Leander quad with Stewart Innes and Al Sinclair from the Olympic pair and U23 sculler Tom Barras. Their efforts pushed the Leander lightweight quad back into fourth place, but Ed Fisher, Charles Waite-Roberts, Jonny Jackson and Sam Mottram finished comfortably ahead of Bristol University, the only other crew in their status.

Leander also took a win in elite coxless fours, where Barney Stentiford, Callum McBrierty, Jacob and Dawson and Matt Rossiter finished more than 12 seconds clear of Goldie Boat Club, the Cambridge University crew who hope to get selected for next Easter’s Boat Race.