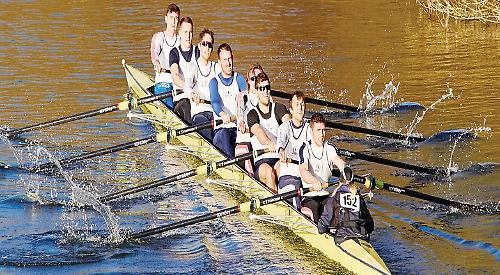 HENLEY Rowing Club once again showed the strength and breadth of their junior squad as they picked up wins across the J15 to J18 boys and girls at the Wallingford fours and eights head last Sunday.

On a cold frosty day more than 250 boats entered this year’s event of which eight were from Henley.

Wallingford is not the easiest of courses to steer and compete on, with the first 1,200 metres of the 4,250-metre course having a number of significant bends which always lead to incidents.

The WJ18 crew of Alicia Redman, Phyllis Barter, Alice Jones, Grace Johnson, Ella Morgan, Georgia Edwards, Clare Pearson, Issy Jonsson and cox Freya Reid had a minor clash through the S bends on the 4,250 metre course and won their category comfortably with a 22-second margin ahead of Becket School from Nottingham.

In the afternoon division the stern four of the eight, Morgan, Edwards, Pearson, Jonsson and cox Reid went on to have an even more comfortable victory in the junior coxed fours with a 53-second margin over Putney High School. The crew were also the second fastest coxed four of the day across all categories.

The WJ15 eight did not start well after a crash at the start held them up. However, the crew of Jess Roberts, Hanna Hill, Georgia Brown, Carla Russel, Amber Weller, Amy Howard, Phoebe Snowden, Hazel Drury and cox Ella Nolson powered over the course and missed a win by just seven seconds. Victory was theirs later in the day when four of the original eight Brown, Hills, Weller, Russell and cox Nelson, won the WJ15 coxed fours by 75 seconds ahead of Lady Eleanor Holles School.

This was followed in the afternoon division by the coxed four of Hugo Rompani, James Wallace, Tom McLelland and James Penrose coxed by John Yolland beating Great Marlow School and Borlase and overtaking four crews in the process.

The mixed masters delivered a strong time in their first mixed race of the season. The men’s elite coxless four delivered a fast time but were pipped to the post by Oxford Brookes.