Promotion-chasing hosts have the edge in derby encounter 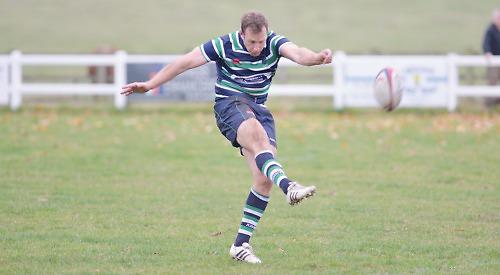 ABBEY put in a committed performance at Maidenhead against one of the front-runners in South West 1 East where the home side eventually triumphed by six tries to one.

The match started in disastrous fashion for Abbey. They kicked off, and when Maidenhead sent a return kick into the visitors’ half number eight David Cole dropped the ball. The home backs hacked the ball towards the Abbey line, and winger Ross Lewis crossed for a try within the first minute. Fullback Tom Finnie saw his conversion go over via the left post.

Abbey responded with prop Paul Emery running the ball into the home half. Second row Knights won good line-out possession, and outside half Luke Burns and centre Arron Ross attacked towards the right. Eventually, Burns kicked to the corner, but fullback Gavin Dampies couldn’t quite get to the ball as it crossed the line.

Another chip from Burns took Abbey into the home 22, and when the visitors were awarded a penalty centre Olly Walton landed Abbey’s first points of the afternoon.

Winger Jules Greenaway made no mistake when catching the restart kick, and when Maidenhead reclaimed possession flanker Maurice O’Connell brought off a fine tackle to dispossess second row Sam Churchyard. But Abbey conceded a penalty, and a kick to the corner put them on the back foot. They kept Maidenhead out at the first line-out, but after conceding a further penalty they had to defend at another five metre line-out. This time the home pack drove successfully and prop Lewis Jones touched down for the try, Finnie again converting. Maidenhead attacked again, and Shaw did well to stop scrum half Perry Jansen following a good break. Abbey pinched the ball, McSweeney made ground, and then Maidenhead were penalised for obstruction. Hooker Nic Jones was shown the yellow card, but Burns missed touch with his subsequent kick.

Knights stole the next home line-out, and Greenaway, Cole and Burns launched an attack. Emery, Greenaway again and Knights carried on the move, and Burns and O’Connell took play into the home 22. Here Walton ran a great line to create space in the middle of the pitch, and his pass to the left sent Greenaway on his way to the line. The winger ran well and touched down for a try and Walton’s conversion made the score 14-10 after 18 minutes.

Soon after Abbey were penalised, outside half Will Thompson took a quick tap and fed Ed Keohane. The centre, arguably Maidenhead’s best player, galloped to the line to score his side’s third try, and with Finnie off the field injured he added the conversion himself.

Back came Abbey again, with Cole and Burns handling well in the home 22. Shaw drove to within five metres of the line, Maidenhead conceded another penalty and Walton added an easy kick to reduce the deficit to 21-13.

Jones returned from the bin, but Abbey attacked again through Hallett and O’Connell. They were awarded a further penalty, but this time Walton missed the posts from 30 metres out. After another good line-out catch from Knights, Burns, Dampies and Gingell handled before Abbey were awarded a penalty 40 metres from the posts. Thompson became the second home player to see yellow, and Burns took over Abbey’s kicking duties, landing a goal to make the score 21-16 at half-time.

In the second half the visitors conceded a penalty under their own posts. By now the home scrum was looking well on top, and the decision was taken to scrummage rather than kick easy points. The decision proved to be a wise one, and Abbey conceded a penalty try as Long’s attempted touchdown was obstructed. Finnie, who had returned to the field, added the conversion.

With 50 minutes of the game gone, Matt Gingell replaced Cole in the Abbey pack. Flanker Ross Muil made a 40 metre break for Maidenhead but good defence from Shaw halted the attack. Thompson returned from the bin, but a good touch kick from Burns sent Abbey back on the attack. Knights made a break, and Ross, Emery and hooker Mark Toland took play to within five metres of the home line. A knock-on ended a promising spell of pressure.

Further good handling from Greenaway, Dampies and Charlie Gingell kept Abbey in the right half of the field, and they reduced Maidenhead’s lead to 28-19 when Walton landed another good penalty. A further Walton kick from an easier position cut the deficit to six points, but a break from Keohane set up a good try for Maidenhead. Thompson and Long continued the move, and Lewis crossed to the right of the sticks for his second try, Keohane scuffing his conversion attempt.

With just 10 minutes remaining Abbey seemed well out of the game. Ollie Charlton replaced Toland in the Abbey front row, and yet again the visitors tried to attack. A 30 metre break from Knights set up a good position from which O’Connell, Emery and Dampies got close to the line. Maidenhead had the last word when a break from winger Scott Prince allowed Lewis to cross for his hat trick. Keohane missed the conversion.