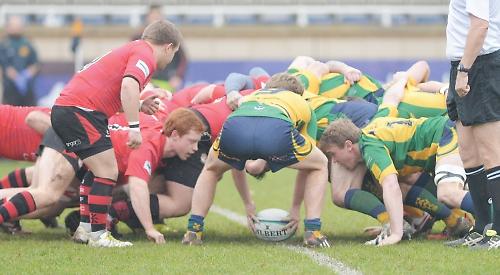 HENLEY BULLS took the field in their latest Zoo Shield encounter at Dry Leas led by Luke Govier for the first time as Charlie Davey took an enforced break due to a concussion and the late call-up of former captains Louis Flynn and Scott White to the Hawks for their visit to the West Country.

Apart from veteran front row forward Rowan Fuller and Martin Nutt at centre the Bulls side included five 17 to 18-year-olds with a number of Vikings stepping up to the next level.

Five victories and a draw in the last seven games has seen the Bulls creep slowly up the table over recent weeks and this latest hard-fought affair was founded on a solid defensive performance that ensured the visitors were unsuccessful in crossing the whitewash throughout including an eight-minute-long barrage of the Henley line where the hosts held out with good close quarter defence.

Martin Nutt opened the Bulls account in the first half with a breakaway try against the run of play but Jersey saw the half out with a two point advantage, 9-7, following three penalty successes from their lively scrum half.

The Bulls lost pack leader Matt Thomas and number eight George Lane through injury when the game was in its infancy but the loss of these two key figures did little to dampen the spirit. Bradley Harewood and Lou Morgan, both 17 years of age, stepped up to fill their shoes despite their lack of experience at this level. Luke Govier was also forced to move from fullback to the back row for the second week in succession and being closer to his pack as captain seemed to pay dividends in driving them to success.

Will Janes scored the Bulls’ second try just after the interval as he intercepted a loose pass to sprint in from distance against the pressure Jersey were exerting on the Bulls 22 metre line. Govier was on form with the boot giving the Bulls a lead at 14-9 which they refused to relinquish throughout the latter stages despite being pounded by the Jersey forwards.

Callum Large was outstanding around the fringes of the rucks, chopping wave after wave of attacks to the ground and Josh Collis working hard to force errors until the spritely duo of Liam Eaton and Harry Burn combined on several occasions along with Nutt to restore territory with good breaks and Sam Quelch providing some security now at fullback. Eaton added to the score spotting a gap and cutting a sharp diagonal line from 10 metres out through the Reds defence to score under the right hand post. Govier again provided the extras.

Jersey refused to surrender and for a good 15 minutes pummelled the Bulls 22 with surge after surge only to be met with shuddering tackles and a try-saving effort from Teddy Hewins that ensured the Bulls’ lead remained intact.

Lou Morgan burst through the Jersey defence but his final pass to the ever threatening Arnell was adjudged to be forward and the Bulls were made to sweat it out until Nutt picked a timely opportunity to kill the game off with his second try; this time, more of an individual effort, showing a clean pair of heels to the Jersey midfield as he sliced through to put the Bulls out of sight and earn the bonus point.