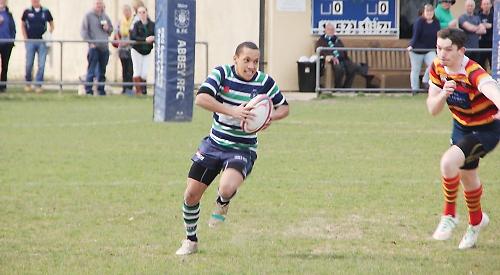 TWO Ollie Walton penalty goals and a Gavin Dampies try kept Abbey in the hunt for a win until Old Patesians grabbed two tries in the last 10 minutes. Despite the loss, Abbey remain ninth in South West Division 1 East, five points clear of the chasing pack.

In an entertaining and closely contested game, Abbey briefly held the lead on the half hour, and were in contention, if not for the win at least for losing bonus points almost to the finish.

From the start Old Pats showed the experience and maturity of a side accustomed to playing a league higher. Receiving the kick-off, they guarded possession denying Abbey any real touch of the ball for 10 minutes – other than two scrum put ins and a line-out, which Abbey couldn’t build on. When the visitors eventually grabbed second phase ball and applied pressure in Pats’ 22, they forced a long clearance kick which the visitors failed to secure. The hosts took the ball, spread it to the space and winger Duncan Spurrier went over wide for the first try, too far out for kicker Luke Offa to take the extras.

Abbey had had their wake-up call and started to compete, applying pressure with good movement and hands. Jules Greenaway and Charlie Gingell on the wings were well fed by centres Ollie Walton and Theo Evered while fullback Dampies also involved himself in the action. In the pack close inter-passing between Ollie Charlton and Ed Whelan kept up the momentum. The reward was two penalty goals from Walton which put Abbey in front on the half hour.

From the second return kick Tom Clark put in a storming run forcing a penalty which Abbey kicked to touch a few metres short of the line, for the subsequent catch and drive. However, they lost the ball, Pats cleared their lines and the chance to build on the lead had gone begging. Old Pats showed how it should be done when their penalty kick to the corner for a line-out was secured and back row man Josh Stevens was driven over for the try. Offa was off target for the conversion but made amends with a penalty goal two minutes shy of half-time.

The turn round score was 13-6, with the visitors playing down a distinct slope so the hard work of the first half, was going to be harder in the second.

The home side were first to add to their score with a penalty from Offa, a sitter right in front of the posts. Abbey might have got to within a point had Walton been successful with two difficult penalty goal attempts, but it was a Gavin Dampies try that narrowed the scores to within five points. Greenaway had linked well with his centres, then a well-judged chip forward bounced awkwardly for the Pats’ defence and Dampies got the touchdown.

Rosehill supporters might have considered the bonus points in the bag, and winning a possibility, but Old Pats secured the win with just 10 minutes left when fullback Jimmy Gahan, always their most potent runner, found the gaps to run in two late unconverted tries.

Abbey competed to the end, all had put in a hard shift, scrummaging soundly, suffering only two but at crucial times, bad lineouts. The replacements sustained the challenge – Ed Whelan took time out to see to a back twinge to be replaced by Luke Daniels; Matt Gingell on the flank, having been fast around the pitch winning turnover ball made way for a reshuffled pack, Whelan returning and Daniels going into the back row alongside Ed House and Chris Shaw. Head coach Fungai and scrum half Diego Garces de Marcilla Bahlsen came on late but Old Pats saw the time out safely enough.