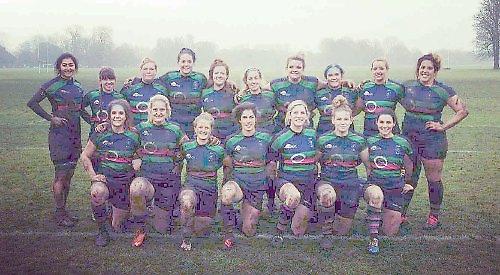 ABBEY LADIES thrashed Windsor Dames 34-0 away as they kicked off 2017 in winning fashion to widen their stronghold at the top of the table.

It was a frustrating first-half for Dave Swan’s side – who were looking to extend their 14 match-winning streak – as tricky conditions hampered Abbey’s usual style of fast-flowing attacking rugby in the first set of post-Christmas fixtures for National Challenge South East West 1.

Scrum-half Ellie Rice did well to recycle the ball despite the wet conditions but the opening 20 minutes saw sloppy passages of play punctuated by intermittent ball carries from Alice Denton, Jess Potter and Meaghan Fowler.

Abbey’s best chance came when winger Rachel Purvey and Bow combined effectively with quick hands, but a slippery ball meant that a knock-on was almost inevitable.

The Nuns dominated the possession throughout the first half, with the energetic Harriet Driver and Claire Stevens proving their selection in the pack, whilst full-back Natalie Bow was kept busy dealing with Windsor’s kicking clearance.

Just before half-time the Nuns utilised the full width of the pitch and the ball fell to Denton, who finally crossed over in the corner to ensure the Nuns went in at the break 5-0 up.

The second half saw a much more positive display from the table leaders and Annette Tomas soon doubled the score, latching on to a well-timed offload from Potter before dummying the defender to run in and score. The Nuns now looked like the team that had thumped Windsor 43-7 at Rose Hill in October and their Berkshire opponents had no answer to the Nuns’ clinical forward play. Second-row Natalie Mitchell opened her points bank for Abbey when she went over for the Nuns’ third, before the in-form Tomas dummied again to go over and then completed her hat-trick soon after, mustering enough strength to ground the ball when tackled on the line to make it 29-0. Flanker Abi Wall was instrumental at the breakdown as the forwards dominated the scums, which led to an intelligent try and Joey Fowler’s first of the season to make it 34-0, which saw the Emmer Green-based side clinch yet another bonus point.