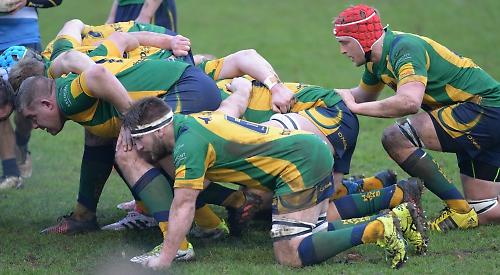 IN a pulsating encounter, Henley Hawks produced a match winning first-half performance and claimed the bragging rights over local rivals Redingensians with a hard fought 17-12 victory on Saturday.

With a new year, came a renewed intent from the Hawks, who looked up for the contest early on and shocked their visitors with a dominant and competent display that gave them a 17-0 lead at the break and belied their low position in the league table.

The Hawks exerted pressure from the start and an early penalty gave them a good attacking line-out. Dave Hyde secured the line-out and a good driving maul from the forwards was finished off by Liam O’Neill who was awarded the first try of the game. The driving line-out has been a weapon that has been successful on more than one occasion for the Hawks this season. Despite the missed conversion, the home side kept up the pressure with skipper Dave Clements and the back row of Dave Hyde, Rob Bell and Tom Hall dominating proceedings.

With the visitors rarely getting into Henley territory, the Hawks enjoyed most of the possession and consistently put the Rams on the back foot as they tried to extend their lead. After 10 minutes and a period of sustained pressure, the Hawks’ backs showed their skills giving Joe Butler an opportunity to cut through a gap in the Rams defence and give the scoring pass to O’Neill for his second try.

The Hawks forwards were dominating the game, especially at the breakdown and Tom Emery, Dave Hyde and Rob Bell secured good yards and helped build the Hawks momentum.

At this stage, the visitors offered little offensively other than defending stoutly for long periods such was the Hawks commitment. They were unable to get any sort of foothold in the game and with continued Hawks pressure, the visitors’ hooker Ben Henderson was given a yellow card for pulling down another Hawks driving maul just short of the line. Turning down an easy three points and after a series of scrums, the referee eventually had no option but to award the Hawks a penalty try. George Jackson converted and the Hawks went into the break with a commanding lead 17-0 lead.

The Hawks could not sustain anything like the levels of dominance of the first period and, the second half was full of frustration, errors and infringements which allowed the Rams, along with their improved commitment, back into the game.

The visitors’ scrum began to dominate and skipper Robbie Stapley and wing forward Andrew Amor began to take control of the loose play.

Indecision in the Henley ranks allowed a Redingensians attack to develop which eventually saw Jack Rossiter take advantage of a fortunate bounce from a chip through to score the visitors’ first try.

This seemed to galvanise the visitors further and shortly after a drive by former Hawk Robbie Stapley created the space for Colin Thomson to score his side’s second try which Atkins converted to set up a nervous finish.

The final 20 minutes were frantic with no quarter asked or given by both teams and although the Rams threatened briefly, the Hawks had few problems to contend with despite a yellow card for Connor Hayhow who fell foul of the new laws on high tackles.

Tom Hall and Rob Bell continued to excel at the breakdown and Hyde managed to steal crucial ball at the lineout.