Walton keeps his cool to earn Abbey share of spoils 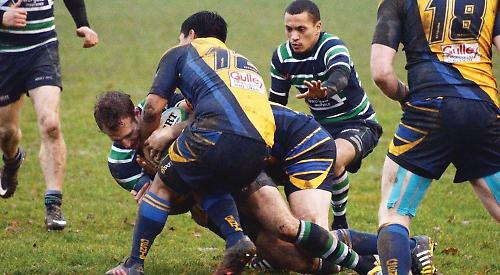 A WELL-STRUCK injury time penalty from centre Olly Walton gave Abbey a share of the spoils against Old Centralians at Rosehill in a match which was largely dominated by the visitors.

Abbey spent the majority of the game in their own half living off scraps of possession, but never gave up against skilful and well-organised opposition.

The home side started brightly and after second row Knights had won the first line-out of the game, outside half Luke Burns cut inside and released skipper Sam Hallett. A penalty was awarded, and Walton scored from 35 metres to put Abbey ahead after just three minutes.

The first scrum of the game saw Abbey hook the ball and they were put under pressure and lost possession. A good tackle from Daniels won the ball back and Abbey’s scrum looked far steadier at the next set piece. A long kick from Burns took play into the visitors’ half, but a 40 metre run from Morgan resulted in Old Centralians’ number eight Rich Pinkney kicking ahead inside the home 22. Fortunately for Abbey the visitors knocked on close to the line but continued to apply pressure and were awarded a penalty in a kickable position.

Surprisingly the visitors decided to kick for the corner rather than collect easy points, but they missed the chance of a try when the ball was dropped at the line-out.

On 18 minutes Abbey had a scrum 30 metres from the line. The forwards delivered good ball and Bevan, Hallett and skipper Mark Toland combined well to take play into the 22. Impressive prop Linden Dixon burst through from the next phase of play, and then Burns and Mutepfa handled before Abbey were awarded a penalty wide on the left. Bevan took a quick tap, and Daniels was stopped two metres from the line. The ball was recycled to centre Arron Ross who passed right to Greenaway. The winger sent a clever grubber kick to the right corner and fullback Gavin Dampies was first to the ball to grab a good opportunist try. Walton could not convert from the touchline as Abbey led 8-0.

The try was followed by a further good drive from Hallett, but soon Old Centralians were on the attack again with flanker Niall Gibbons running well until he was forced into touch by winger Charlie Gingell. Old Centralians were back in the home 22 and further pressure led to Abbey conceding a penalty just to the right of their posts. Scrum half Harry Preece took a quick tap and he dummied to pass before strolling over the line to touch down for the simplest of tries. He converted his own score to cut Abbey’s lead to a point.

Abbey then lost a line-out, and a break from second row Dale Westcook resulted in Gibbons crossing for a try right under the posts. Harry Preece again converted to put the visitors 14-8 ahead.

Abbey were struggling to gain any quality ball at this stage of the game, and it took a good tackle by Greenaway to stop Morgan after he had been released by replacement forward Pete Willetts. Just before the break tackles from Dixon and Daniels saw Abbey claim possession. Burns set Ross up for a break through the middle and after the visitors were penalised Walton landed a straightforward goal to make the half time score 14-11.

In the second half Abbey were awarded an early penalty, but after Burns had missed touch Pinkney ran for 20 metres to launch a good attack. Ross saved Abbey by stopping Townsend and Greenaway relieved the pressure with a kick to touch. Daniels, now playing at number eight, picked up and ran from the next scrum, but after Abbey lost the ball Ross made an important tackle on Pinkney.

Abbey’s cause was not helped after 53 minutes when Burns was forced to retire from the action with a bad cut to the head. Diego Garces de Marcilla came on at scrum half with Bevan moving outside him.

With six minutes of normal time remaining Mutepfa returned to the action in place of Daniels, and from the next move Shaw was penalised for offside. The kick was not an especially difficult one, but Harry Preece sent the ball wide. Greenaway kicked clear, Dampies and Bevan chased well and Abbey were back in the visitors’ half.

Old Centralians won the ball back again, but after it was kicked back into the home half a great diagonal run from Greenaway gave Dampies the chance to dash up the left wing. The visitors conceded a penalty, but Bevan over-hit his touch kick and the visitors had a 22 dropout.

The game had now entered injury time with the score the same as it had been at the break. Garces de Marcilla launched another break for Abbey, Ross supported well, and Centralians conceded a further penalty. The kick was just outside Walton’s range, and this time Bevan made no mistake when he kicked for touch. Shaw won the ball at the front of the line-out, but Abbey failed to retain possession.

Old Centralians conceded a penalty in the 84th minute, and this time Walton signalled his intention to kick for goal. The kick was well to the right of the posts and 38 metres out, but Walton landed the goal to tie the scores.

A minute now remained, and after Abbey had failed to secure the restart kick the visitors attacked for the final time. Abbey were penalised for kicking the ball in an offside position and Harry Preece had the chance to reclaim the lead with the last kick of the game. He was five metres in from the left touchline and 38 metres from the posts, and to Abbey’s relief the scrum half struck the ball badly. It barely left the ground as it crossed the line, with Preece himself losing his balance as he kicked.