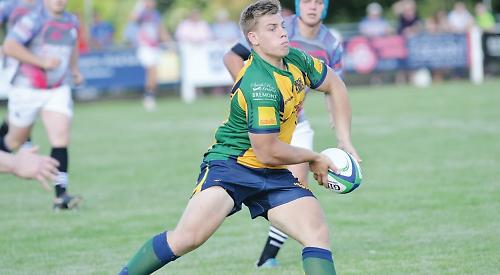 As the referee was preparing to blow the final whistle of the highly competitive local derby game three results were possible. With the Hawks leading 29-24 they were on the verge of defeating the league leaders. If Chinnor scored a converted try as they closed in on the Hawks line they would win. If, however, a try was scored but not converted the result would be a draw and this then turned out to be the result as Chinnor fly-half, Sam Angell who had already kicked three conversions, as well as touching down the final last minute try, scuffed his conversion attempt wide.

This was a dramatic conclusion to a game that reached the heights in terms of drama and excitement but not skills due to the difficult playing conditions dictated by a murky misty mid-winter afternoon with fog sometimes threatening to close in on players who were frequently having to gouge impacted mud out of soles of their boots.

Chinnor had the better of the early exchanges after an opening foray by the Hawks and after just nine minutes fullback Kiernan Goss squeezed over for a try which was converted by Angell who after 17 minutes put the home side 10-0 in the lead with a penalty from near to the posts.

The Hawks were showing some ability to drive Chinnor back with driving well supported mauls which included assistance from their lively backs. They turned this ploy into points when wing Simon Perry forced his way through to touch down. They were not able to convert this effort so were five points in arrears.

The visitors had further reward from the efforts of their forwards with hooker Tom Emery using his skills in burrowing through the Chinnor pack to score the first of a brace of tries after 27 minutes. Emery found his jumpers in the line-outs and the Hawks eight to maintain a good supply of the ball from attacking line-outs and preventing Chinnor from relieving pressure when hard pressed near their own line.

The tendency of the Hawks to relax after scoring was again evident when they did not compete for a restart kick and within two minutes Alex Bradley was able to score which with Angell’s conversion put Chinnor 17-10 ahead at the break.

The Hawks had a lively start to the second half in contrast to the lethargic attempt to clear restart kicks in the first. Breaking down the left wing Perry hacked on effectively and created a dangerous loose ball situation over the home try line which was persued with interest by Hawks centre Liam O’Neill who touched down for George Jackson who had joined the fray in place of Jimmy Stevenson-Wright, to convert, equalising the score at 17-17.

The ding-dong nature of the game continued as the Hawks relaxed at the restart and Chinnor lock Nathan Hannay was able to drive over to make the score 24-17.

Soon after Emery was again able to find room to score his second try making the score 22-24. The home side’s ill-discipline now began to take its toll for after getting back to full strength, but on the return of Ross Parkins after being off for 10 minutes from 49 minutes they then lost prop Koree Britton after 68 minutes. His absence was critical as the Hawks had a driving maul in full cry which was stopped illegally and resulted in referee Daniel Collins awarding a penalty try which with the conversion gave the Hawks a 29-24 lead.

Chinnor rallied and took play to the Hawks line where Angell bustled over the line leading to the final score of 29-29.

The Hawks had satisfaction from once again preventing Chinnor doing the double over them and scoring five tries to four.