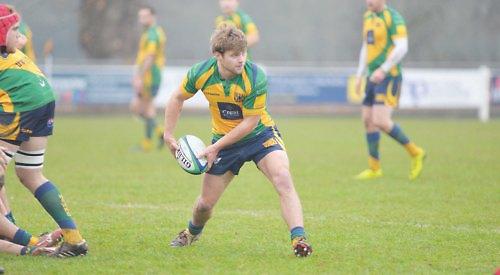 In similar fashion to the way the Bulls started against Blackheath the previous week, half-backs Harry Burn and Howe were driving the attack with some lively rucking from Scott White’s pack but getting little territorial yardage as Ampthill appeared man for man physically heavier and more powerful.

This size and superiority was evident at the first two attacking line-outs where Henley’s target-men were anticipated and dominated effectively by the Ampthill eight who continued this line-out dominance throughout.

The Bulls suffered an early setback as JJ Udomu suffered a recurrence of a knee injury as he lunged into a tackle and whilst he was off the field being assessed his replacement Liam Eaton sustained an injury to his leg under a heavy tackle that meant an end to his involvement.

The home side took 22 minutes to break the deadlock with their first try as several previous attacks had been rendered pointless by some good Bulls defence. With the conversion added and the confidence and tempo of the Ampthill attacking patterns proving difficult to contain for the Bulls and the home side made short thrift of adding their second.

The Bulls had a couple of probes into Ampthill territory as Teddy Hewins broke out from fullback and Sam Portland was carrying some hard yards after his move to centre supported by Martin Nutt.

The Bulls forced a few turnovers through defensive pressure where Zaki Chamnaoui and George Lane were proving effective and it was a break out after one such turn-over led by Burn and captain Scott White that put Tommy Haynes in a position to burst down the left flank and put the perfect pass to Oliver Portch to touch down for a debut try. Howe’s conversion fell short on the wind.

This proved to be Haynes’ last contribution as a deep facial wound ended his game. Before the half-time whistle, Ampthill pierced the Bulls defence again as their forwards muscled over to make it 17-5.

The Bulls were never going to give in easily and recovered another restart and blasted their way through Ampthill’s retreating cover for man-of-the-match George Lane to show his pace sprinting in from 30 metres to score.

A restart was taken bravely in the air by Josh Collis and carried towards the Ampthill 22 where Harry Burn drove his pack and darted and scurried his way over the line to bring the score back to 17-10.

At half-time Barnaby Abdale-Weir was replaced in the front row by Lou Morgan and soon after the interval injury struck again as the Bulls target man Matt Thomas was removed with a back injury. At this point the Bulls could have capitulated and succumbed to the powerful onslaught but instead seemed to use the loss of key contributors as a catalyst to put in a fiercely contested second half.

Ziana Alexis took the field for the last 30 minutes to boost the Henley scrum and despite looking the more likely to score again their efforts led to a knock on Ampthill’s 22 which was returned with interest to a scrum on the Henley 22. As Ampthill wheeled the scrum and their number eight fed their scrum half on the blind side, Burn’s pathway to make the tackle was blocked by the match referee and Ampthill utilised the shield to create a two-on-one overlap to score.

Charlie Sichel almost put Oliver Portch away for a second try with half an hour remaining but his participation in the game was ended by the clumsy tackle that followed his slick off-load and Jamie Cox took the field ensuring the Henley bench was empty. White, Chamnaoui and Lane continued to press hard to create an opening for the Henley backs but Ampthill’s defence remained resolute.

As the Bulls pressed for an equalising try they threw caution to the wind and this all-out risk-ridden effort proved their undoing as Ampthill added the final blow from a turn-over at the ruck as Henley resources ran thin.