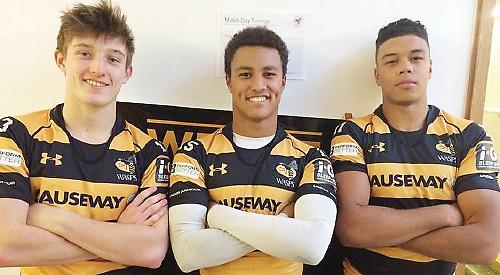 DESPITE the relocation of Aviva Premiership giants Wasps to Coventry, The Henley College remains a crucial part of the club’s junior academy and player development pathway.

With 18 of the current Wasps U18/U17 academy group on the AASE rugby programme at the college, Henley have had a strong season this far.

Moving into this year Henley College have continued their winning ways with victories over Coventry Academy and Bristol-affiliated SGS Filton on Wednesday of last week.

The later stages of 2016 also saw ex-Henley College AASE students Connor Eastgate and Jack Willis make their senior debuts for Wasps in the LV Cup with wins against Worcester and Sale.

Later this year The Henley College has been invited by the RFU and Japanese Rugby Union to compete in the Sanix World Youth games. The tournament will take place in Fukuoka, Japan, in April, where Henley will compete against the best school boys’ teams in the world including New Zealand school boy champions Mount Albert Grammar School, a team that AASE manager Jack Wiggins knows well from his time there. Wiggins said: “MAGS were a big rival of my old school Hastings Boys; in fact they beat them in the final this year to earn a place in the Sanix Competition.

“It is a great opportunity for the College to be going out to Japan and playing against the best in the world and for me that’s what it is all about. We want to prepare these lads for life in the professional game and give them new experiences. This might be the start for some of them.”

Anyone interested in applying to the AASE programme at Henley College should attend the next trial at Dry Leas on February 25 from 10am to 12 noon. To register your interest contact the AASE manager on jwig@henleycol.ac.uk