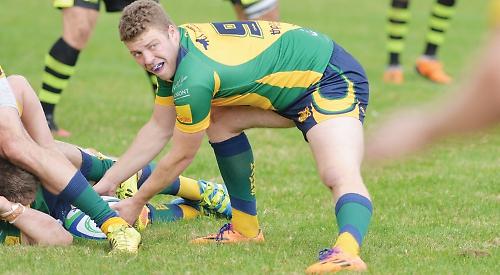 LAST Saturday proved a day to forget for the Hawks as they crashed to defeat in controversial circumstances at basement-side Exmouth.

The Hawks went into this match as favourites having recorded two good results — drawing at the then top-of-the-table Chinnor and beating local rivals Redingensians — whilst the hosts sat rooted to the foot of the table with just one win all season.

From the word go the Hawks were on the back foot. Using a new coach firm to provide the transport for the four-hour journey they started one hour late because if an error by the contractors. Fortunately, with dry sunny conditions they were able to meet the 2pm kick-off time.

Already unsettled by the late start they suffered a further set-back with a late alteration to the starting line-up as fullback James Comben was unable to travel which resulted in Alan Awcock moving to fullback and David Hankinson coming into the centre position moving up from Henley Bulls.

Playing conditions were good for the start of the match played on a dry firm pitch with a variable cold strong breeze coming off the nearby estuary.

The Hawks made an encouraging start with fly- half Joe Butler chipping over an advancing home back line as he pursued a bouncing kick which eluded his attempt to touch down before the dead ball area. Nevertheless, the Hawks half backs continued to press the home defence and a strong burst by George Jackson led to him touching down under the posts. Jackson’s indifferent kicking form continued when he pulled his conversion attempt wide of the posts.

The Hawks continued to dominate territory and possession and during the first half Exmouth rarely took the game into their half. Henley pressed hard to add to their score by use of driving mauls and they hammered away at the home line. However, referee David Clarkson, whose control of the set scrums was slow and indecisive, killed the momentum of the game and he was also unable to agree to the Hawks attempts to ground the ball when driving over. With the help and advice of his assistant he disallowed what appeared to be a touchdown by Tom Emery.

During the half the nearest Exmouth came to scoring was from two failed penalty attempts by fly-half George Meadows. On the half-time whistle Jackson increased the Hawks’ lead to 8-0 with a successful penalty conversion.

The Hawks’ domination was immediately challenged right at the start of the second half when flanker David Bargent crashed through after just three minutes which with a conversion by Meadows reduced the Henley lead to one point at 8-7.

The Hawks were able to have some success through a driving maul by using the support of their backs, which is their frequent tactic, which gave centre David Hankinson the opportunity to touch down to restore their lead to 13-7. Although Jackson could not convert he was successful with a penalty after 51 minutes to give the Hawks a more comfortable lead of 16-7.

This heralded a period when the Hawks were in charge battering away at the Exmouth try line for a 15 minute period. However, the home defence stood firm helped by, not for the first time this season, the Hawks to being ingenious to break through. Meadows reduced the arrears for the home side on 56 minutes with a penalty to back the score 16-10. The Hawks’ energy levels reduced by their efforts whilst Exmouth encouraged by their defensive valour led to a turn in the tenor for the game and in the last 15 minutes it was the visitors who were under pressure as was the referee who resorted to the issue of yellow cards to calm the temperature of the game. The result was that the home side were reduced to 13 players in the 60th minute and the Hawks to 14 after 71 minutes.

The home side continued to press hard and after two further minutes lock Jake Albon was given a yellow card for foul play under the posts joining wing Xavier Andre in the sin bin alongside Exmouth’s Michael Richards and Dan Swain.

Then came the dramatic final five minutes of the game. With a penalty awarded for Albon’s offence Exmouth indicated that they would kick the penalty awarded under the posts and the kicking tee was presented to their new kicker Richard Cadywould. However, instead of kicking for goal at the posts he changed his mind and put in a kick to the right hand corner which was collected by centre Mark Wathes who dived over the line claiming a try. The referee consulted with his assistant on the touch line and awarded the try which was converted by Cadywould which with the conversion of a further penalty three minutes later brought the final score to 20-16 in favour of Exmouth.

However the Hawks coaching team protested that the Wathes try was not valid as it was contrary to law 25 (1) which states on award of a penalty the side offended must indicate to the referee that they intend to kick for goal — this allows the assistant referees to position themselves behind the posts to decide whether the resultant kick is successful and advise the referee accordingly. The decision to kick for goal once made is final and cannot be changed.

After the game the referee admitted that his decision to award the try was incorrect. The matter has been referred to the RFU South West referees advisory body for comment.

Apart from the controversial matter concerning the award of the try the ultimate final score was indicative of the Hawks’ failure in matches this season to finish strongly enough to win closely contested games.