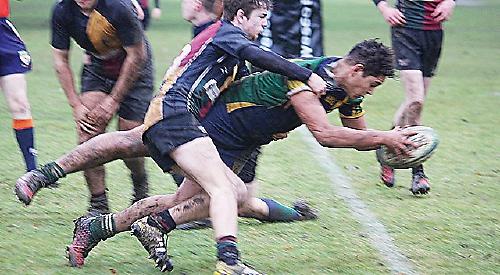 HENLEY Hawks Colts gained a morale-boosting victory over Windsor in a friendly match on Sunday.

Despite the miserable weather and the heavy going, the match proved to be a good contest as Henley clawed their way back into the game and ultimately emerged on top.

With several key players injured Henley took a while to settle down. A lively Windsor team scored twice in the opening 10 minutes and for some time dominated most facets of play.

It was in the forwards that an interesting contest evolved as Henley gradually gained the upper hand in the course of the game through foraging for the ball and tackling impressively.

Ben Venner at number nine gave his backline good service and this allowed captain Jamie Winch at 10 to create problems for Windsor as the Henley backline varied their running lines.

Through switching the point of attack and good support work, Henley scored some fine tries and, after taking a 19-15 lead mid-way through the second half, they began to impose themselves on proceedings and seized the ascendancy.

Alex O’Brien and Max Ainsworth started to punch holes in the Windsor defence and Henley were superior in timing the off-load, invariably able to set up someone in a better position to continue a passage of play.

With number eight James Rhodes frequently conspicuous in attack and in defence, Henley were back to their best in the last 15 minutes. Windsor’s defence became ragged and Henley took advantage by crossing for three further tries. The win against good opposition was encouraging at a stage of the season when Henley are preparing to embark on the major part of their league programme. Poor weather has prevented several fixtures but hard work at training has enabled coaches, Mark Venner and Jerry Edwards, to develop a good brand of running rugby.

l Practices for the colts, U17s and U18s, are on Thursdays at 7pm as well as Sundays at noon if there is no match. New members are welcome and can attend practices at the club or contact (01491) 574499 for further details.