Visitors have no answer as Nuns close in on title 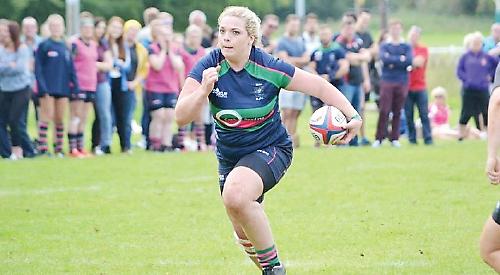 ABBEY NUNS took a massive step to securing promotion as they beat second-placed Newbury 12-0 at Rose Hill to move nine points clear at the top of the table, writes Fiona Tomas.

The Nuns went into the match on the back of a 15-game winning streak but there were no signs of complacency from Dave Swan’s side as his side enjoyed the brighter start.

Fly-half Annette Tomas kept up her record of scoring in every league match this season and ensured Abbey were on the front foot inside the first quarter.

The number 10 spotted a gap in Newbury’s back line defence and dummied the fullback before storming past to score Abbey’s first try, with fly-half Alice Denton following up with the conversion.

Tomas showcased more of her attacking prowess minutes later when she exploited a poorly organised Newbury defence, running from the half-way line to score under the posts.

While Denton could not convert, Abbey led 12-0 at the break, having kept a resurgent Newbury at bay with forwards Hollie King, Meaghan Fowler and Harriet Driver standing firm for Abbey, providing some huge defensive hits on their opposite numbers. Scrum-half Ellie Rice steered possession towards Newbury’s half with a series of box-kicks as the Nuns looked to consolidate their lead, but the chasing Abbey backs could not thwart the Newbury defence which held firm.

The second half was a much more physical contest as Newbury improved their defensive line and intensified their aggression. Abbey’s Berkshire opposition were efficient in quickly recycling the ball at the breakdown and prevented the Nuns from making ground.

Abbey’s best chance came when Denton ran a brilliant line, who offloaded to Tomas who in turn found Rice, but the University of Bath skipper couldn’t convert as she was tackled at the last minute. Moments later, a second effort by the Abbey pack was held up tantalisingly short of the line.

Despite Abbey losing full back Natalie Bow to the bin for a high tackle, the Nuns had enough to keep Newbury out and extend their unbeaten season, which will surely see them be crowned champions with three league matches remaining.